HTC One Max Might Also Feature A Fingerprint Scanner, But On The Back Of The Device [IMAGES]

All major manufacturers in the mobile industry are consistently trying to improve the devices that they launch by including some kind of innovation that will set them apart from the competition. As we know, innovation isn’t always possible on the scale that some would like, so when in doubt, the next best thing is to take inspiration from those around you. It seems that the monstrous HTC One Max may have been a little inspired by Apple’s inclusion of Touch ID in the recently released iPhone 5s, and will launch with similar fingerprint scanning capabilities.

Imitation is often said to be the highest form of flattery, so it’s unlikely that we will see Apple making any public outcries if the One Max does launch with biometric functionality. Recent leaked images of HTC’s new device certainly seem to indicate that the Taiwanese company believe the Californian giants are onto something with the inclusion of a fingerprint scanner. These particular images have found their way into the world via the Chinese Sina Weibo social network, and gives a clear view of the internals of the device, allowing us to feast our eyes on what definitely looks like a scanning component.

Unlike the iPhone 5s which has the Touch ID sensor embedded in the existing hardware Home button, it looks like HTC have gone for a different setup with the gigantic One Max. The Verge is reporting that the sensor looks to be sitting directly in-between the device’s camera module and the SIM card slot. This could be an indication that HTC believe users would interact with the scanner using an index finger with a firm grip rather than placing a thumb on the front of the device. With a device the size of the HTC One Max, it would certainly make sense to expect this kind of interaction. 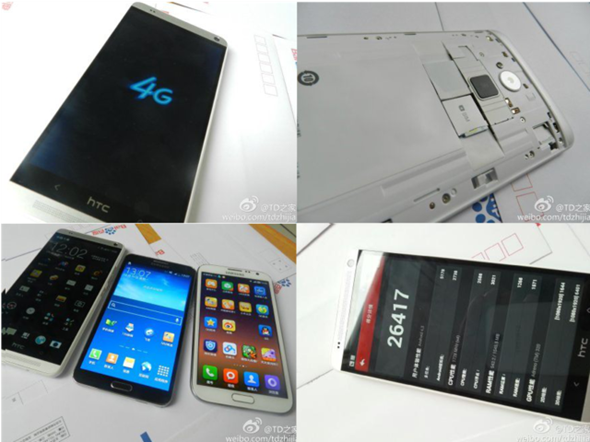 The speculation surrounding the possible inclusion of the scanning capabilities also goes beyond what we can see on the leaked images. A number of Verizon staff based in retail stores throughout the United States are reporting that they have actually used the device during training sessions and are confirming the existence of the fingerprint sensor. We don’t have any confirmation of what functionality will be linked to the One Max scanning component, but when we do we’ll be sure to bring to directly to you.