I use the HTC One and iPhone 5s on a daily basis, and although there are other nice-looking handsets on the market, the general consensus is that these are two of the most beautiful currently available. But while the Apple flagship is merely four months old, the One is heading towards the latter stages of its tenure, and consumers are already eagerly waiting to see what’s next from the Taiwanese company. A few rumors have been floating about with nothing really set in stone as yet, but a new HTC One M8 concept dreamt up by Google+ user Nikolai Prettner has well and truly blown us away. Check it out after the break!

Despite its age, the HTC One can still more than hold its own up against some of the newer, premium devices that have since been released. The iPhone 5s and iPhone 5c, as well as the Samsung Galaxy S4 and Galaxy Note, have all gained their fair share of plaudits, but with a beautifully crisp display (which, by the way, boasts a higher pixel density than any of the aforementioned), and a wonderfully engineered design, many still see the One as, well, The One.

Given that it’s still selling well and more than adequately serving smartphone users far and wide, it’s not as though the market is exactly crying out for the successor to the HTC One. But the company behind it knows that consolidation, rather than complacency, will be the key to cementing this re-emergence among the industry’s big players.

The more we hear of the HTC One 2, as it is being unofficially dubbed, the more exciting a prospect it becomes, and with no official word as yet, Prettner’s renders will surely do a job of whetting our appetites.

The capacitive buttons are thrown out, and instead, the bumped 5-inch display gives an edge-to-edge finish. It has to be said that for every smartphone offering an edge-to-edge display, there are perhaps more than a thousand concepts, such is the rarity of this seemingly sought-after feature actually making the final cut. As you can see, however, HTC could do a lot worse than listening to the dreamers this time around: 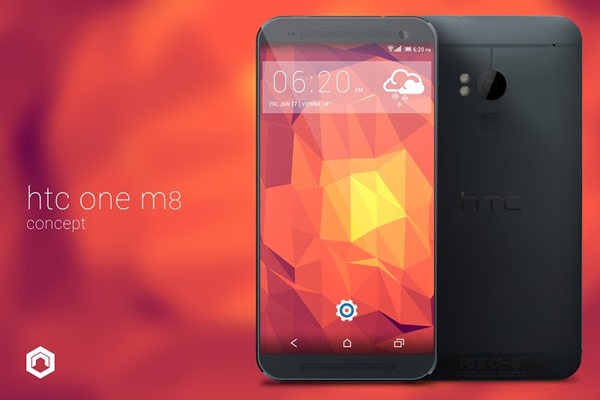 From what we’ve heard, the HTC One 2 will pack a 2.3GHz quad-core Snapdragon 800 processor 2GB of RAM, expandable memory, a 2,900 mAh battery, as well as the latest Android 4.4 KitKat.

The word on the street is that we’ll be seeing the HTC One 2 in all of its loveliness at some point in March, and with nothing particularly exciting having been unveiled so far in mobile space this year, we certainly cannot wait!