How To Unlock Nexus 4 / 10, Galaxy Nexus Bootloader Without Fastboot

For Linux-based operating systems, especially Android, bootloaders are more like a double-edged sword. On one hand, you’d want an unlocked one, because that will enable opening up your device to all sorts of modifications, including gaining root/super user access, but at the same time, an unlocked bootloader also means a potentially vulnerable smartphone or tablet that’s open to malicious attacks. With the amount of new apps that the Play Store gets on a daily basis, it’s also hard to figure out whether an app is truly what it claims to be, or some developer with the intent of stealing your personal information that’s unleashed a Trojan horse in the guise of an otherwise-innocent-looking application. Thus, the risk of remaining exposed stays lingering above you.

Google’s Nexus line up of devices is particularly ideal for how bootloaders should be approached by manufacturers. It’s as simple as keying in an ADB command, and the bootloader will be unlocked, making use of Fastboot. The disadvantage that this holds, however, is the fact that once the bootloader is unlocked, the entire data and system partitions get wiped, making you start afresh with getting your Android stuff in order. There’s the scenario where you avoid the vulnerability by relocking the bootloader once you’ve, say, gained root access, but there are a couple of problems with that. One, that will again wipe data, and second, most users either don’t know or don’t care to do that, keeping the vulnerability in place. While the device remains flexible to be manipulated further in this state, there’s no guarantee that this manipulation won’t be harmful and malicious.

To avoid both the above issues, you can opt for BootUnlocker for Nexus Devices. It’s an Android app that will unlock the bootloader on Nexus 4, Galaxy Nexus and Nexus 10 from within the Android operating environment, thus eliminating the need for using fastboot. By doing so, not only will your data remain in tact (no wipe required here), but also, the bootloader itself is not unlocked, per se, but only a few bits changed in the /param partition, allowing room for all the modifications that you need.

The application requires a rooted Galaxy Nexus, Nexus 4 or Nexus 10, and will let you unlock and relock the bootloader as many times as you like. Since this approach doesn’t open up the miscellaneous partition on your Android to code modifications, and since the app itself remains under your control, using BootUnlocker makes sure that you retain a certain measure of security when it comes to bootloader-level vulnerabilities. 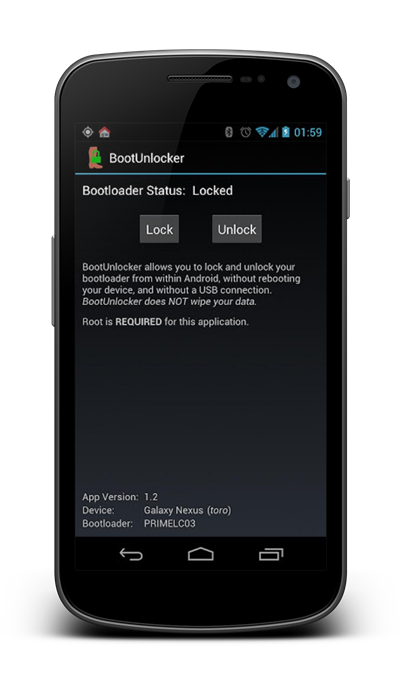 BootUnlocker for Nexus Devices is available over at the Play Store as a free download, and will not work on Nexus 7.