How To Toggle iPhone’s Display On / Off Using Wave Gesture

When it comes to gimmicky new features, all of the major smartphone vendors are at it in one way or the other, and with every new Galaxy S release from Samsung, the company has tried to impress the world with a plethora of perks. Air Gestures is one such feature, but if you’re an iPhone user with no inclination to make the jump to an Android, you probably haven’t interacted with this interesting implementation on any kind of level. Luckily, the jailbreak scene enables the rules to be broken from time to time, and if you’ve ever wanted to enjoy an element of control over device by throwing the odd wave here and there, a new tweak by the name of WaveOff has you covered. Details after the jump!

While WaveOff is not quite as feature-rich as the likes of Air Gestures, it does allow you to turn your device’s display on and off by simply waving across the proximity sensor located atop the display. Since the tweak doesn’t offer any interaction thereafter without actually touching the display, it’s rather pointless, but it is a well made, rather cool tweak.

The main point of being able to use a device without touching it is, at least by Samsung’s suggestion, the fact that you can, for example, open apps and check messages without having to touch the display. This is ideal for those with grubby fingers who don’t want to risk blemishing their treasured gadget, but unfortunately, WaveOff‘s limited offering means that once you’ve turned your display on, you’ll have to touch the display anyway.

Still, WaveOff is a paid package costing 99 cents, which is a reasonable price for a pretty good tweak. We’ve given it a try ourselves, and can confirm that it does indeed work as advertised, so if you want to get involved, you can grab it from Cydia. It’s up right now on the BigBoss repository, which is a default of your Sources list provided you haven’t opted to manually delete it. 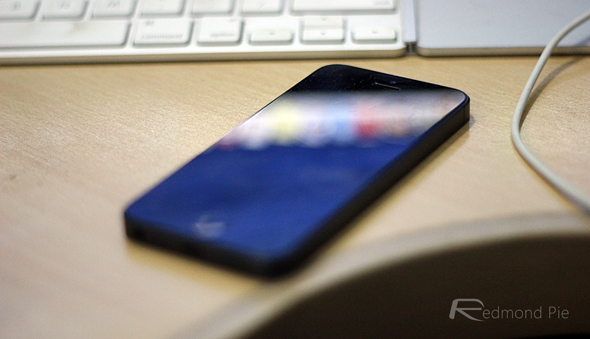 Grab it right now, give it a whirl, and be sure to leave your thoughts and comments via the usual mediums below.