How To Report iOS 9 Beta Bugs To Apple [Guide]

Now that the first public beta release of iOS 9 is in the hands of early adopters, Apple is hopefully starting to get some truly useful feedback, helping it squash bugs and work out kinks before the final version ships to users later this year. That will only happen if users report bugs and issues as they crop up though, and Apple knows it. That’s why each installation of iOS 9 in public beta form includes an app that makes the reporting of bugs as easy as can be.

Installed along with iOS 9’s public beta itself, the Apple Feedback Assistant is what those using public beta releases can use if they want to get in touch with Apple to report problems and in turn help make iOS 9 a better place for everyone when it ships later this year. The steps needed to do so are easy, and the benefits for a few minutes of work could be huge. 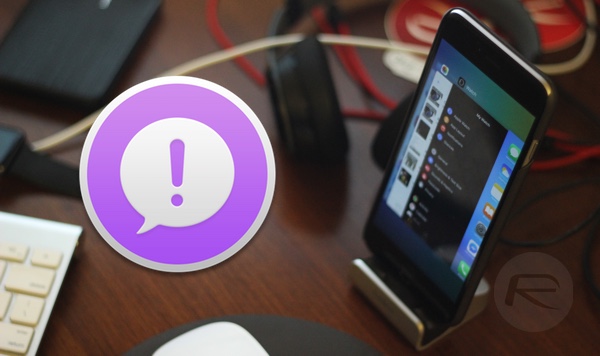 Here’s what you need to do to start reporting iOS 9 problems if you are using the public beta.

Step 1: Take a screenshot of the problem if at all possible, because it makes it easier for Apple’s engineers to visualize what it is you are talking about. To take a screenshot, press and hold the Home and Power buttons simultaneously and let go at the same time. The screenshot is saved in the Camera app in a new album called Screenshots.

Step 2: Launch the Feedback Assistant app from your home screen.

Step 3: If this is the first time you have launched the app, you’ll need to log in with your Apple ID, otherwise tap the compose button in the top-right corner.

Step 4: Select the category that suits your issue and then start filling in the rest of the fields. The more you fill in, the better, so be as thorough as you can.

Step 5: Attach any screenshots you have taken.

Step 6: Once complete, either save the report as a draft or submit it. It’s unusual to hear back from Apple, but it’s not unheard of either. Don’t sit by the phone waiting for Tim Cook to call though, because he won’t.

If you’re really lucky, the next release of iOS 9 in beta form will see your particular issue fixed. Hopefully!