How To Quickly Toggle The LED Flashlight From The Lock Screen On Your iPhone Running iOS 5.x

The Apple iPhone may have just celebrated its fifth birthday, but the seemingly never ending list of useful functions that the device can be used for is always on the rise. The introduction of the iPhone 4 brought with it an integrated rear LED that was intended to be used as a flash for the built in camera but thankfully Apple also allowed developers access to the APIs that control the light.

The official App Store as well as the jailbroken Cydia platform contain a wide array of packages that allow the LED flash to be used as a torch for those situations that require a little bit of extra light. However, most of them generally exist as their own application and require users to launch from the Springboard before toggling switches on or off. Not exactly the longest process in the world, but still one that could be shortened. 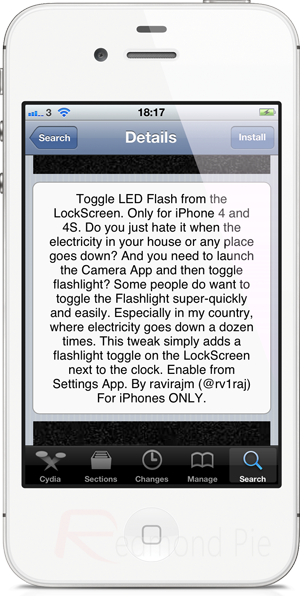 The Torch tweak that lives within Cydia drastically shortens that process by allowing users to activate the rear LED flash on the device through the simple tap of a new icon that is placed directly on the iPhone lock screen when activated. Cydia already has a number of torch type offerings, but like their App Store equivalents they generally need Notification Center to be launched, something that requires the device to be unlocked before invoking NC and eventually tapping the button to turn the flash on. 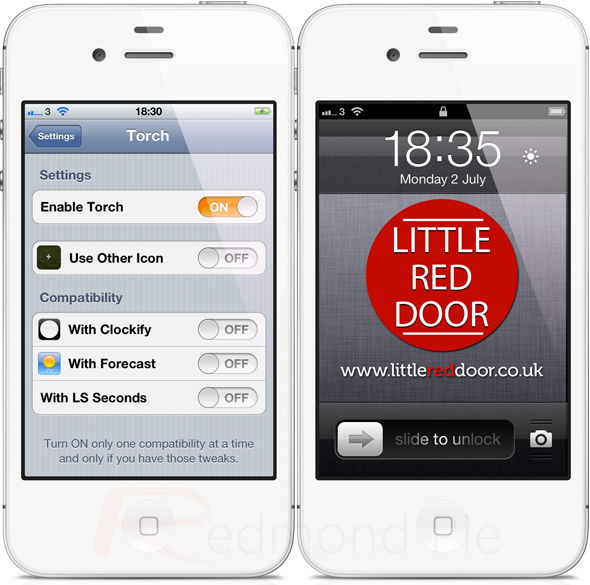 When installed, Torch does not install any additional Springboard icons, instead coming with its own preferences options through the native Settings application. Options include being able to toggle the tweak on or off as well as choosing between two individual icon options that act as the user portal between the lock screen and the flashlight. The final settings are all compatibility centric and allow the user to use the Torch package as well as additional lock screen packages. The developer currently offers support for Clockify, Forecast and LS Seconds.

If you have been following us, you would know that we have already covered a similar tweak called FlashCam for iOS 4.x devices that did the same, but Torch in my opinion not only has more native look and feel to it, but it also supports the latest iOS 5.x firmware, and it brings no bells or whistles and doesn’t have illusions of grandeur. The developer has obviously built the tweak to do one thing and it manages to perform that task perfectly, something that resonates with me personally as I believe mobile software should be kept simple and intuitive.

Torch is available to download from the ModMyi repository and requires an iPhone 4 or 4S with an integrated rear LED flash.