How To Install Windows 7 On Android Tablet [Video Tutorial]

If you pop on down to your local purveyor of technological goods and ask for a cost-effective, powerful and functional mobile tablet then one might assume you would be furnished with an Android powered solution. Offering great value for money, a number of smaller 7-inch Android tablets are a fantastic way of getting involved in the world of slate computing without shelling out hoards of cash. But, what if the Android tablet you acquired was running Microsoft’s Windows 7?

Personally speaking, I’ve never really understood the desire for individuals to purchase a specific piece of hardware running a very specific tailored operating system and then want to go through some insane home-brew process to run another OS that it’s not supposed to run. But, each to their own and I can certainly understand from a technical challenging aspect where tech enthusiasts would want to get the likes of Windows up and running on a tablet designed for Android. That’s exactly what’s happening in the embedded videos; Windows 7 booting, initializing and running on an Android tablet. 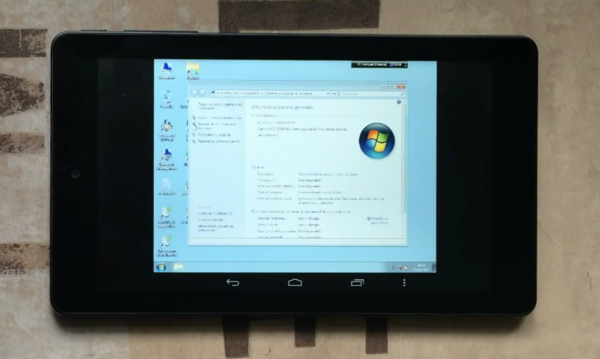 The beginning of one video shows a typical Android launcher home screen with a number of available apps before starting the Windows 7 boot process. By utilizing the Bochs emulator the owner of the videos and device is all ready to emulate the Windows 7 experience on the Android hardware, but it isn’t exactly what you might call a seamless experience. The initial boot process, from actually launching the app to getting to a home screen capable of interaction, takes approximately sixty minutes. The actual Windows 7 experience isn’t the best you will ever see either. For those of you who don’t know, Bochs for Android is a piece of software which can emulate Pentium PC in a virtual environment. In short, it can run/emulate x86 based operating systems like select versions of Windows, Linux or BSD.

The launch times of programs and applications is best described as infuriatingly slow. The scrolling performance of Windows is pretty much non-existent and the overall graphical aspect of the operating system is at an extremely low level. Still, actually getting Windows 7 up and running on hardware and architecture that it was in no way intended for is still a technical feat that is worthy of significant applause and admiration. Seeing this in action, albeit an extremely unofficial version, makes it easy to see why Microsoft has ploughed significant resources into its excellent Windows mobile platform.

Check out the videos below for yourself and see if it’s something you’d like to try.

Thanks, Jules for sending this in!