How To Get Windows Experience Index (WEI) Back In Windows 8.1 [VIDEO]

The Windows Experience Index that was initially introduced in Windows Vista is probably the most basic form of benchmarking that you can get for a Windows based PC. Although Microsoft didn’t really introduce it for benchmarking, but rather, as a measure to determine whether your PC will be able to handle a certain application software or not. However, in modern day computers, Windows Experience Index (WEI) was an easy means of tracking which component was bottlenecking the performance of your machine. With Windows 8.1, however, that was no longer the case.

The thing is, with Windows 8.1, even though the internal engine behind WEI remained intact, Microsoft simply removed the GUI shell from above it, which means that you cannot find your experience rating in Windows 8.1 natively. However, since the engine in the background continues to exist, it’s possible to pull the same rating using a third party tool, and that’s exactly what Winaero WEI Tool is about. It’s a portable lightweight utility that makes use of the WEI engine in Windows 8.1 and provides you experience rating on the same criteria as the native utility. 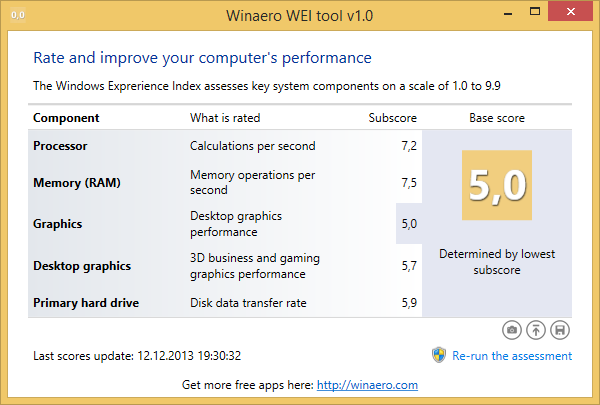 The program runs same tests as WEI itself ran, and hence, the ratings are assigned on the same parameters as you’d expect to see from before. Being an independent app, there have been a couple of changes from the developer as well, for instance, you can save the results as HTML file, take a screenshot and/or upload it to imgur automatically. Not sure how useful that would be, but it’s there nevertheless. Oh, and being a third party app, and maybe I am being too picky on details, there is one annoying shortcoming – instead of displaying scores in decimals, Winaero WEI Tool shows them using a comma. It’s nothing significant, but I find it really annoying. 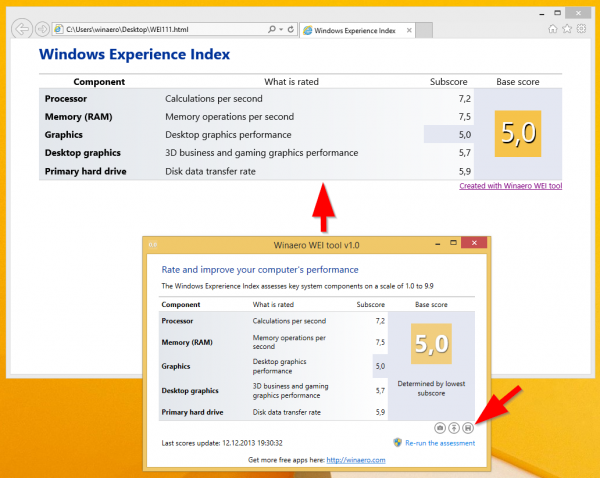 Over all, Winaero WEI Tool is quite a handy utility to have, mainly because it’s really small and lightweight, is portable (so installation free) and gives you some useful generic information. It speaks volumes for Microsoft to take out WEI for no good apparent reason, and apps like Winaero WEI actually indicate that the Redmond company took away something that was both useful and desired. It’s something similar to the Start Orb that got sacrificed, and perhaps Microsoft should pay more respect to what users actually want rather than imposing things on them.