Android device owners will often tell you that their platform is far superior than the competition because it gives them the freedom to change how the operating system looks based on their own personal tastes. With that being said, a great deal of Android users rarely experiment with a change of wallpaper or background, let alone going for a full user-interface overhaul. Maybe they have just been looking for that one fantastic interface experience.

There will always be a great deal of discussion around whether or not users actually like the custom interface bundles that manufacturers apply to their Android devices. Some will undoubtedly despise anything custom that is being forced upon them, whereas others are more than happy to go with the flow and have Samsung or HTC apply choices on their behalf. In all honesty, some users won’t even be aware that their phone ships with a custom UI. If you happen to be a lover of Samsung’s TouchWiz offering, then maybe this Galaxy S4 home launcher and weather widget port will be right up your street.

A senior figure with the Android development community has taken it upon himself to do some work centered around the launcher and weather widget that comes bundled with the Galaxy S4 smartphone. The S4 launcher and accompanying AccuWeather widget have picked up quite a few fans in the time since the original launch, so there will more than likely be a lot of users who will greatly appreciate the fact that it is now available for all compatible Jelly Bean devices.

The port has been tested and shown to be working with on AOSP based ROMs such as CM10 and 10.1, as well as shown to be functional on a number of popular Android devices such as the LTE Galaxy Note II, the One S, Xperia Z and Galaxy Nexus. There are certain compatibility issues when trying to run this port on devices that are already running the TouchWiz UI, but with that said, it’s probably a very small percentage of installers that would actually be trying to get this look and feel on a TouchWiz device. 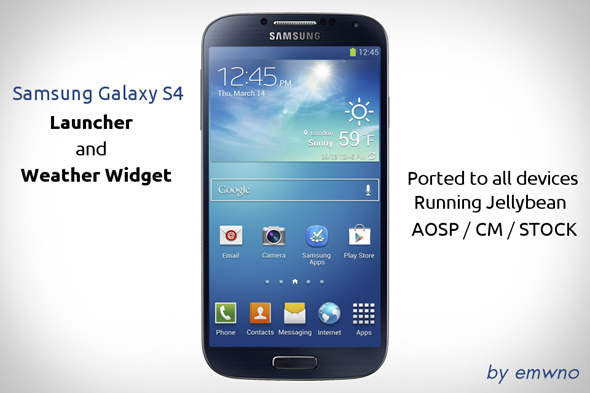 If this is the type of modification that you’ve been looking for or want to learn a little more about then head on over to the developer’s thread on his work.