Pretty much every regular user of the internet will have heard of, or used torrent files and services in order to download some type of content. I’m also pretty sure that the majority of world wide web regulars will have either a basic or a premium Dropbox account, something that is a perfect solution for storing files in the cloud that can then be synchronized across multiple devices and machines.

How would you feel about a service that offers all of the benefits which are associated with downloading with torrents, but is also infused with Dropbox storage capabilities, meaning that all downloaded torrent content would be immediately pushed across all machines and devices that are associated with the Dropbox account? Once upon a time you may have chortled in my face for suggesting such a thing, but the new Boxopus service is in existence to offer that exact functionality to torrent lovers and Dropbox users. 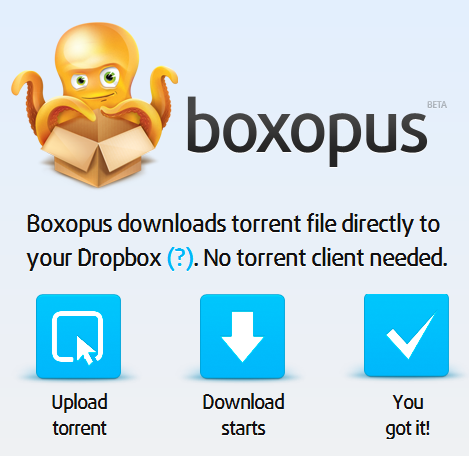 Boxopus is currently in a beta stage and is currently allowing new registrations from interested users through either a direct account registration or by using social credentials from services such as Twitter, Facebook or Dropbox. The software itself is pretty unique and is built around some fancy Dropbox API trickery that allows any user to feed a torrent file into the web-based service and have the contents of the file remotely downloaded into the attached Dropbox account. The benefits of such a service are immediate, such as allowing members to download any torrent file from any location and have it pushed across multiple devices as well as no longer requiring an actual BitTorrent client to download the contents.

The whole concept behind the Boxopus utility is relatively simple and involves a backend process that initially downloads the torrent file to the Boxopus developers hard drive, which is then moved to their own Dropbox account before finally being moved across to the user’s personal Dropbox folder when the download is finally complete. When the move is finished, a new Boxopus folder is created in the Dropbox Apps directory that will contain all future torrent files that have been downloaded using the service. In the initial bets stage of Boxopus, users will be able to benefit from unlimited download traffic, but will ultimately be throttled when the service goes live, with additional traffic needing to be purchased.

A service like this is bound to be popular with those users who make regular use of torrent downloading. Having the ability to quickly download torrents with only one or two clicks is such a valuable tool, with the contents being available on multiple computers, smartphones and tablets through Dropbox only adding to the value of the Boxopus service.