Facebook Introduces New ‘Find Friends Nearby’ Feature On iOS, Android And Web; Here’s How To Start Using It Now

The social network behemoth, Facebook, is undeniably the company of the moment after hitting the headlines in recent weeks for not only snapping up the popular Instagram mobile app in a one billion cash plus stock deal, but for also becoming a public company with its initial public offering. Mark Zuckerberg has built up what appears to be a substantial social networking empire that is always looking to acquire new companies as well as introducing new technologies and features to the already impressive network.

One of the latest additions to the Facebook experience is the ‘Find Friends Nearby’ feature that introduces a whole new location based aspect to Facebook, essentially allowing members to locate friends who are based nearby as well as find and interact with new people. Historically, the worlds biggest social network has always attempted to stop those who do not know each other from interacting by limited messages and friend requests, but the ability to seek out new people with this new feature could be moving away from that. 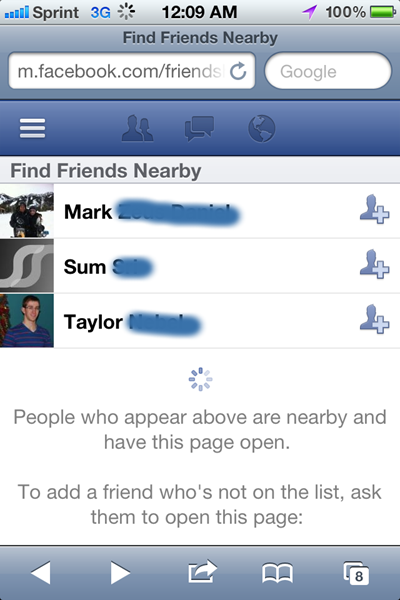 Considering the official Facebook mobile apps have generally been extremely buggy, users could be forgiven for thinking Zuckerberg and co weren’t putting much emphasis on the importance of mobile, but with this latest feature being available on the native mobile apps as well as through a dedicated mobile web URL, it would seem that certainly isn’t the case. It was only two months ago that Facebook acquired the Glancee company and technologies, something that they have clearly utilized with this latest offering, currently named Friendshake.

For those who want to experience the service, it requires that you are logged into Facebook as well as being on the specific mobile web URL. Anyone who is experimenting with the service and is local, will show up in the interface. It remains unknown what Facebook see as the main usage for a service like Friendshake, but as TechCrunch rightly point out, it could be perfect for quickly interacting and bookmarking people who you meet whilst at a conference or other social event.

If you are the type of Facebook addict who is fond of social and location based interaction, then invoke the Facebook app on your smartphone and then go to Menu >> Apps >> Find Friends >> Other Tools >> Find Friends Nearby and see who is seeking the same interaction around you in your local area.