When the likes of TechCrunch and LA Times started using Facebook as their post commenting system, the feedback they got on it was mixed. Normal people loved it because it cut out the anonymous trolls and the trolls hated it because, well they couldn’t troll anonymously. Now though they can get back to doing what they do best – spouting rubbish about their favorite smartphone that they’ve turned into a new religion.

Their salvation is provided by a new Chrome extension called Defaceable that allows users to post anonymous comments using a fruit as their only identification.

As TechCrunch explains, the plugin works by stripping out the content from the site’s code.

Defaceable works by parsing the html code and extracting the ID of the comments you’re looking at, checking against the Defaceable database for defacements it can show you. 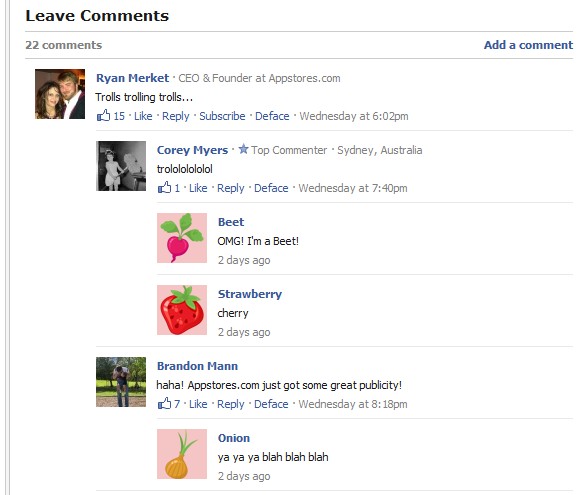 And there lies one of the extension’s best features. Because of the way it works, only Defaceable users will see comments from people using it. Don’t want to see the garbage? Simply don’t install Defaceable.

It’s the best of both worlds and, hopefully, keeps the trolls out of the limelight.