How To Add ‘Remind Me Later’ Functionality On iPhone In Mail, Safari, Messages, Lock Screen Notifications

We love it when Apple takes it upon themselves to introduce new features with major releases of iOS. We tend to find that smaller point releases contain critical bug fixes and amendments to make things a lot more usable, whereas the larger significant launches contain the notable feature enhancements. One of the more welcomed additions to iOS 6 was the ability to silence incoming FaceTime and phone calls with a remind me later type feature, but the question does arise; why didn’t Apple have the foresight to make this available across additional parts of the operating system?

Thankfully, if there’s an iOS usability issue, or an area that we feel can be made a little bit better with a few tweaks here and there, then there is generally a developer willing to take on the task. This is particularly true with the release of the AnyReminder package that extends the Apple implemented remind-me-later feature and introduces the functionality to different aspects of iOS. At the time of writing, the developer in question had chosen to add the feature to Mail, Messages, Mobile Safari and lock screen notifications.

The tweak is essentially intended to make sure that users are able to step away from what they are doing, safe in the knowledge that they won’t actually forget about it long-term. Incoming notifications that are displayed on the lock screen can be dismissed or set to be reminded of later by dragging up the native camera grabber icon that has previously been reserved for invoking the Camera app. Mobile Safari also gets the same treatment, with a new entry being added to the action alert sheet that allows users to remind themselves to pop back to the page. 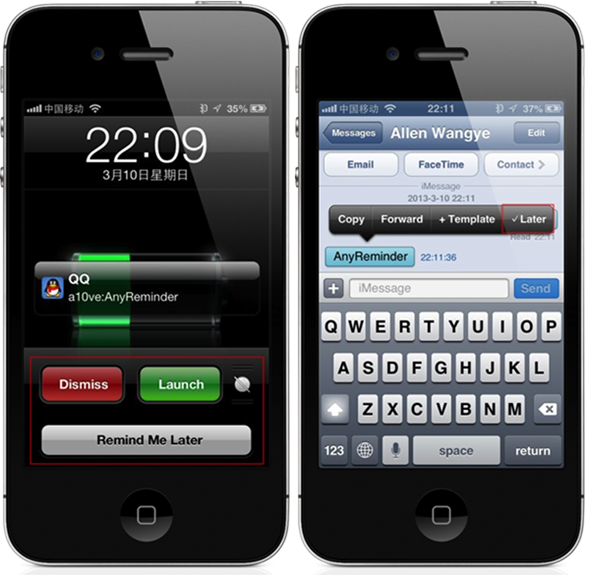 Perhaps the most important aspect of the tweak from a user’s perspective is the integration with the native Mail and Messages apps on the device. I’m pretty sure that we have all received incoming emails or text messages that we have wanted to reply to at a later date but ultimately forgot about. AnyReminder makes sure that doesn’t happen by allowing the user to simply set the system to remind us about the message in one hour time.

AnyReminder is available as a $1.99 download from the BigBoss repository and requires a jailbroken device running iOS 6.0 or higher.