How To Add Custom Boot Animations To Any Samsung Android Device

Android is a lot about control. Most of the smartphone platforms are, to be honest. For instance, Apple is also about control, but the Cupertino company prefers to keep that control in its own hands. What the users installs on their device, how they can use their phones, what apps are even allowed to run on the said platform. Google’s Android, however, puts most of that control in the users’ hand, staying true to its open source nature. Of course, manufacturers choose to restrict certain areas, but that’s only for stability and prevention of user accidents. Overall, a user has much more control over almost all areas of the smartphone when it’s running Android, which is further enhanced by a very active developer community.

It is this same control that lets you customize an Android phone or tablet to your liking, and as much as you desire to. Ringtones, wallpapers, custom launchers, widgets etc., are all part of that customization efforts. One rather ill-regarded element of this is boot animations. For most users, they won’t even mean a thing, since the only time you come across those is when you start up your device from a powered down state. However, for customization enthusiasts, that’s a pretty big deal. Now, Android has a standard model for these start up sequences, where a conventional bootanimation.zip file contains everything that’s displayed on device power up. Samsung, however, made a rather bizarre choice here, opting for a proprietary QMG format in place of the ZIP one, thereby limiting the ROM chefs’ choice to include custom boot animations in their offerings (QMG can only be created using commercial software that’s rather expensive). 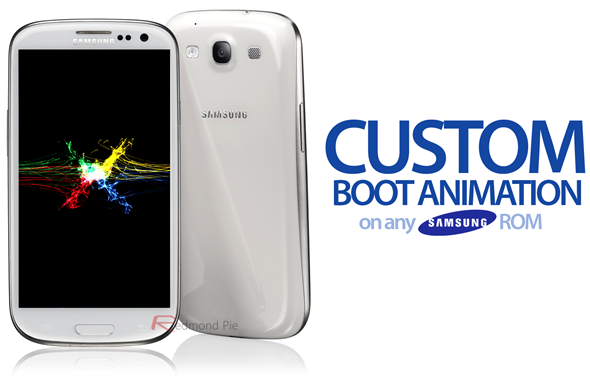 To address this, XDA developer smokin1337 has come up with a mod for all Samsung devices that follow the QMG route, which will bring back the support for standard bootanimation.zip. Essentially, there are two versions of the mod (both of them use an updater script, by the way); one that adds support for bootanimation.zip to the system, while the other that only modifies Samsungani – the Samsung protocol for calling boot animations. The instructions for using both remain the same.

It should be noted that these will work only on rooted phones, since the updater script uses BusyBox for mounting partitions. You also need to have the bootanimation.zip that you want to use, and the required ZIP file from the source link below.

Step 1: Using a root-level file explorer on your Android, mount the system as read-write and navigate to /system partition.

Step 2: Copy the bootanimation.zip file that you wish to use at this location in your device:

Step 3: Now, put the hack ZIP file at the root of your device’s internal memory, reboot into recovery and flash the ZIP file (which will invoke the updater script in turn and enable the boot animation).

Step 4: Reboot the device. You should now see the new boot animation that you placed in system/media partition, as opposed to whatever you had earlier.

The method is fairly simple, and requires very little effort. For more information, downloads, variations to the process and troubleshooting help, head on over to the XDA forum link below.