Google have already proved that they are onto a winner with their iOS version of the popular Chrome web browser. Immediately after release the application was downloaded so many times it forced its way to the top of the paid app charts and has hovered around that spot ever since, picking up a large number of positive reviews on the way. The simplicity of the browsers user interface mixed together with the ease of use and built-in user gestures makes it an extremely positive experience for users.

Just because it has multiple positives doesn’t mean it has no negative points. Slow execution of JavaScript based content is definitely one of the issues and as with most mobile based browsers on iOS, the lack of being able to natively download files is something that causes some concern. Step forward the jailbreak community. Cydia already has a number of Chrome based packages living within it ranging from being able to make it the default browser all the way to an actual existing download enabler. The new Chrome Download Manager package that has recently landed is an extremely professional and polished attempt at bringing download features to mobile Chrome on iOS. 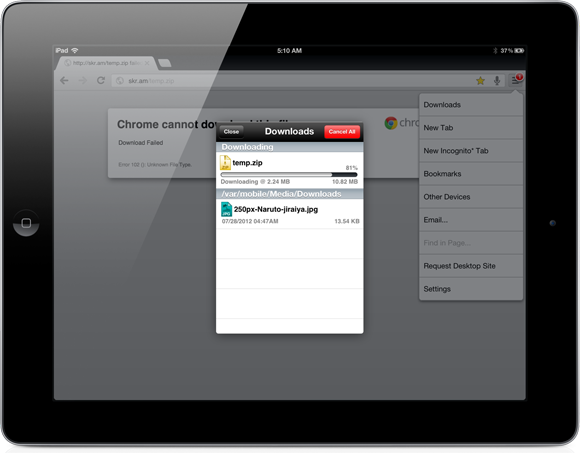 First and foremost the package enables the ability for the user to visit websites and actually download content from those sites to the device. This could be particularly beneficial to people who wish to download images or movie files for immediate use on the actual iPhone or iPad itself. At the time of writing the package supported the downloading and opening of thirteen different file types, most of which we come across everyday as mobile and computer users. The developer has built-in support for the following file types: zip, rar, iso, dmg, ipsw, torrent, mp3, pdf, png, jpg avi and doc with the promise of more coming with future updates. 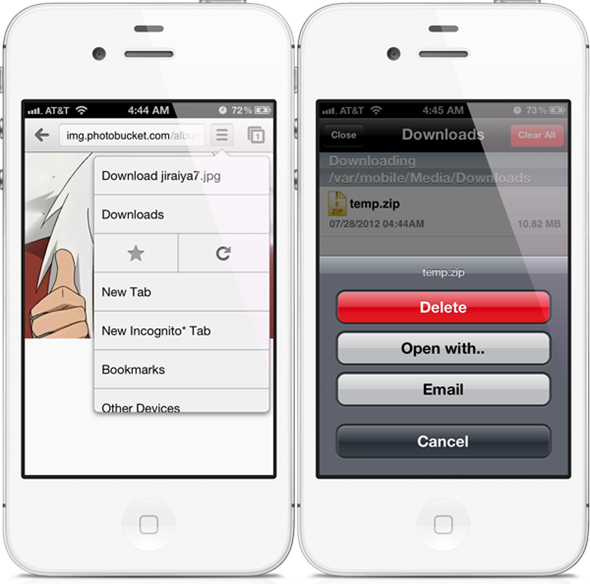 Once files are downloaded they are sent to the /var/mobile/Media/Downloads folder on the device itself and can be accessed extremely easily via the new inline menu options that CDM brings. Once in the folder, the files are opened and viewed with different packages depending on the file type. iFile is obviously one such package that has support for a number of the supported files, as well as packages like Dropbox and GoDocs. Chrome Download Manager also has the ability to badge the app icon when downloads are in progress and gives support for emailing downloaded files, as long as they are under the 20MB limit. Notification Center has also been included by the developer to provide notification of any completed downloads if Chrome has been sent to the background on the device.

Chrome Download Manager is available from the ModMyi repository for the introductory offer of $3.00 and is compatible with the iPhone, iPod touch and iPad. 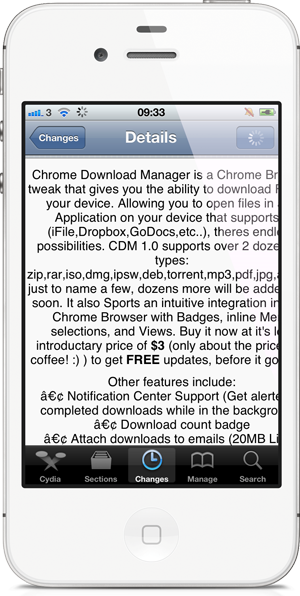