How To Compose Texts Or iMessages On iPhone With Drawings, Handwriting And Sketches

When it comes to packages and tweaks that find themselves at home on the jailbroken Cydia platform we tend to go through dry patches where we don’t seen anything really being released that brings an awful amount of benefit to the user. This could be for a number of reasons, but one of the main driving factors behind this is the fact that Apple is making iOS more advanced with every major update thus removing the need for certain jailbreak based enhancements. Plus, Cydia is pretty much saturated with offerings meaning a lot of the good ideas have already been done.

With that in mind, the usefulness of a certain package is an extremely subjective thing and even if it only appeals to a handful of people and solves a problem they are experiencing then it definitely can be classed as useful. The Grafiti tweak that has recently landed on Cydia certainly falls into the realms of being useful and actually makes you wonder why developers haven’t tackled this area head on in the past. The package hooks into the native Messages application ships with iOS and provides significant functionality enhancement that I imagine would definitely solve some issues for certain users.

The name of the package might suggest that it is some form of artistic software, but what it actually does is allow simple drawings and sketches to be produced directly within the Messages application, and then attached to a text or iMessage to be sent to a recipient. One of the great things about this package is that it doesn’t actually require the receiving individual to be jailbroken, or have an iPhone in fact, and works on the same basis and technology of sending a multimedia message. With that said, it is worth noting that if send as a normal message it may invoke a cost from the users network. To be able to use the Grafiti tweak, users need to make sure that more than one keyboard is enabled through the device settings before pressing and holding the Globe symbol. 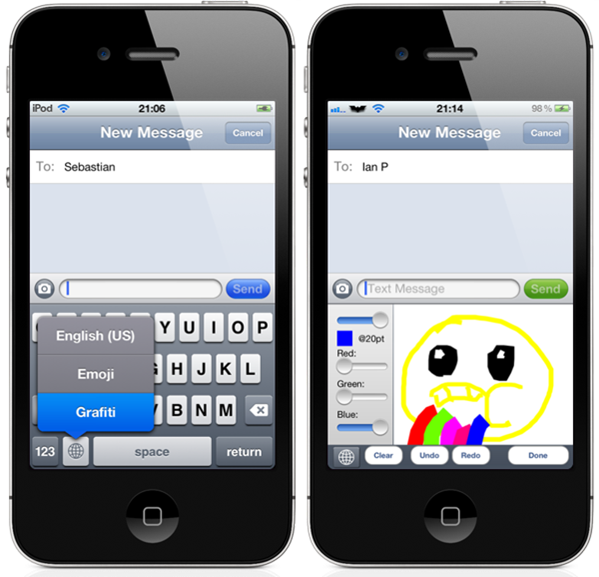 In terms of included features and functionality, Grafiti allows immediate production and attachment of sketches and drawings with the main benefit of this being that the user doesn’t need to produce an image in a different application and attach it as a media attachment. The size and color of the used brush can also be changed that allows pretty detailed and decent sketches to be created, for those who can draw anyway. The package also supports the ability to undo changes made and redo if necessary. The developer has also gone to additional lengths to make sure it looks as native as possible and fits in with the look and feel of the Messages application. 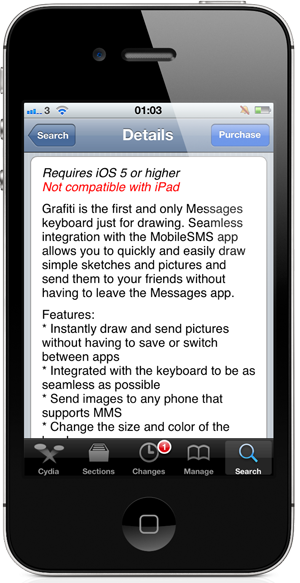 Grafiti is available from the BigBoss repository for $0.99 and requires an iPhone or iPod touch with iOS 5 or above. This package is not compatible with the iPad.