Apple has officially pushed out yet another beta of iOS 10.3.2 to registered developers. As this is only a very small point update, and as it follows on so closely from the public release of iOS 10.3, the company hasn’t really afforded device owners with any new functionality or features. That means that the update is all about under-the-hood improvements and tweaks, which in turn means that we once again have another speed test comparison video to see if Apple has made any noticeable performance improvements with this latest beta.

The usual rules and constraints apply with this latest batch of uploads. Both iOS 10.3.2 beta 3 and the latest public version of iOS, iOS 10.3.1, have been installed onto iPhone 5, iPhone 5s, iPhone 6, and iPhone 6s in order to test how each version of iOS performs against the other on the aforementioned devices. We don’t expect any dramatic improvements or mind-blowing performance increases, but it’s definitely a worthwhile test to see if Apple has managed to squeeze any enhancements out of this third iOS 10.3.2 pre-release seed. 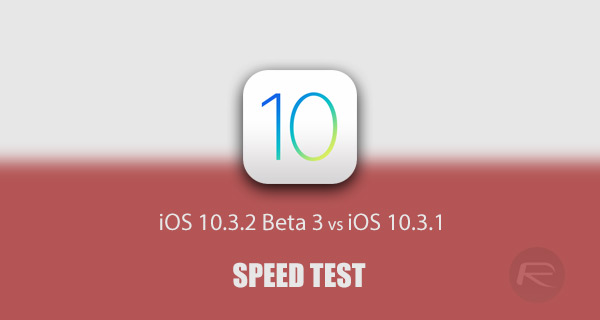 The oldest device on test, Apple’s iPhone 5, instantly looks to perform ever-so-slightly better on iOS 10.3.1 from a boot-up perspective by getting to the Home screen quicker than its iOS 10.3.2 beta 3 counterpart. The opposite is true for iPhone 5s, and iPhone 6s, whereas iOS 10.3.2 beta 3 and iOS 10.3.1 on iPhone 6 appear to boot-up pretty much neck-and-neck.

The next stage of this test is looking to see how performant the different versions of iOS are when launching a myriad of stock apps and scrolling through content or photographs.

As we have seen with previous versions of iOS 10.3.2 when compared against iOS 10.3.1, launching apps from the Home screen, such as Messages, Stocks, Calendar, and Camera, largely offers a near identical performance. There are certain instances where one appears to invoke quicker on iOS 10.3.2 beta 3, but the content and the ability to actually interact with the app and what it offers is nigh-on identical. This can likely be attributed to smoother and slightly tweaked animations within Apple’s current beta versions of iOS.

If you own one of the devices in question, and want to see if iOS 10.3.2 could offer any benefits to you, then check out the videos for yourself and see what you think of Apple’s latest attempts at iOS engineering.