For those individuals who are prepared to act with haste, there is an immediate $80 saving to be secured on Apple’s stunning Series 3 Apple Watch hardware. This is the lowest price that we have seen Apple Watch Series 3 since this year’s Black Friday, which makes it a must-have deal.

The very first thing you are going to notice about Apple’s Series 3 smartwatch is the stunning display, which, like most devices, acts as the visual viewpoint to everything that is going on with the hardware. Depending on the size you choose, you are going to get a display which is either 759 sq. mm or 977 sq. mm and which sits at approximately 10.7mm in thickness. The display itself is formed of OLED technology and should be comfortable serving up 1,000 nits of brightness to give you a crisp and vivid experience.

Once you get past that screen you are essentially interacting with all of the power under-the-hood which makes Apple Watch Series 3 the beast that it is. It comes with a dual-core Apple S3 processor which offers performance improvements over Apple’s previous iteration. It also features the stunning Digital Crown which makes interacting with the device super efficient and actually quite fun, as well as having an array of internal sensors, such as an optical heart rate sensor, accelerometer, gyroscope, and a barometric altimeter. This model doesn’t contain the second-generation sensors found in the Series 4 Apple Watch but they are definitely performant enough to keep the average user happy. 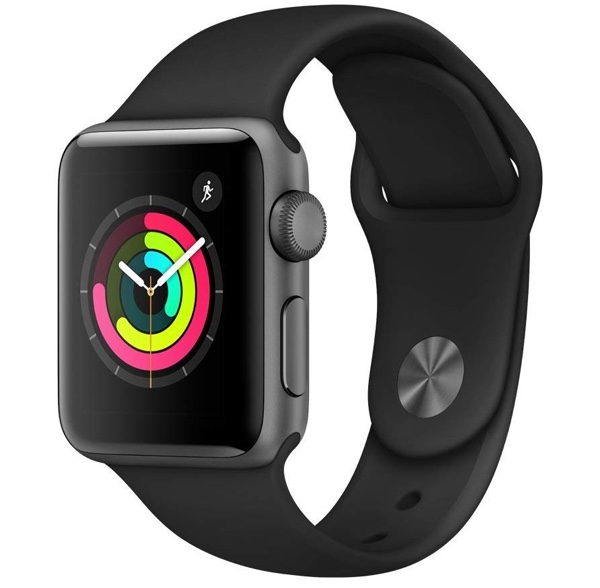 The battery should be good enough for up to 18-hours worth of uptime and it comes with Apple’s watchOS pre-installed which can be managed by connecting a device to the Watch. This also allows apps to be added from the main smartphone and all future versions of watchOS which are compatible with this model can be easily installed. And because this Apple Watch is heavily workout and health and fitness focused, it is also swimproof, which allows you to take a quick dip without worrying.

This is definitely a great deal and a great saving for those people who aren’t previous about being on the latest hardware.