The Samsung Galaxy S5 is the electronics giant’s latest and greatest smartphone, and has brought with it a myriad of exciting new features. As well as the fingerprint sensor, gold color configuration, heartbeat monitor and other such niceties, the device is also a great deal more rugged than its predecessor. Thanks to a more robust build quality that also renders the handset waterproof, the Galaxy S5 is a lot more rough-and-ready than its predecessor, although as you might imagine, it more than met its match when faced with the bullet of a .50 caliber sniper rifle.

Sure, there’s not really any practical logic behind shooting at a defenseless handset with the kind of arm meant specifically for warfare. But our insatiable desire to see brand new, expensive gadgets destroyed with machines and weapons seems to grow stronger with each new release, and while the ruggedized nature of the Galaxy S5 means that it can more than withstand the day-to-day bumps and scrapes, I’m afraid the result of this particular ‘test’ is grimly predictable. 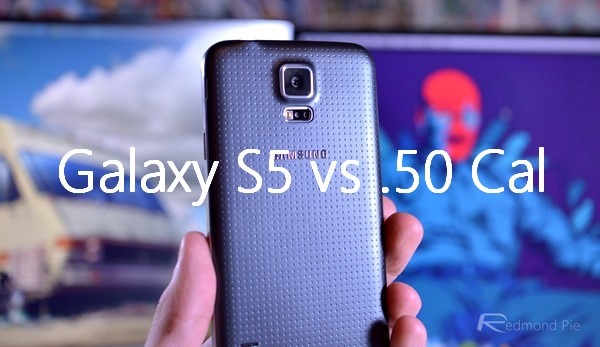 Gun fanatic and self-proclaimed Tech Assassin Rick Ryan (RatedRR on YouTube) thought it would be entertaining to snipe the Galaxy S5, and while the image of such a gleaming new gadget meeting such a brutal demise sends a chill down our spines, it can’t be denied that the whole event makes for great television.

The tech world has been taking plenty of shots — in the metaphorical sense — at the Galaxy S5, and given how some were expecting the South Korean outfit to finally buck the trend and offer some high-end aluminum housing, it’s not surprising that some have been underwhelmed by the end product.

Nevertheless, while some have pointed out the company’s perceived lack of innovation, the advertising machine has once again helped another Samsung flagship get off to a great start in the retail market.

Anyway, if you came here to see a Galaxy S5 get absolutely obliterated by a sniper rifle, then I won’t keep you any longer. Check out the gruesome video as embedded below, which also runs through some of the more basic torture tests in advance of the main event, and be sure to leave your thoughts and comments via the comments section.