Here’s How Apps Would Look Like On A 7.85-inch iPad Screen [IMAGE]

If it turns out there is no “iPad Mini” featuring a 7.85-inch display, it will surely go down as one of the most out-of-hand rumors in recent tech history. When the likes of Bloomberg and the WSJ corroborate stories circulating in the rumor mill, that usually means said murmur has some substance, but with conflicting reports and no real solid evidence, the jury remains out with regards to whether Apple is actually plotting such a tablet.

The talk has been on-off for several months, but ever since Google announced the powerful-yet-cheap Nexus 7 at I/O, things have escalated to a whole new level.

To round-up the rumors, the tech world is expecting a smaller iPad featuring a 7.85-inch display, and the device, which is supposedly being manufactured down in Brazil, is thought to be releasing October, although it’s unknown as yet whether it will arrive at the same time as the next iPhone. As well as being a little more compact (thus competing with the Nexus 7 et al), word on the street is that it’ll be a great deal cheaper than the current iPads, retailing at a much more consumer-friendly $299-$399, depending on where you read.

Although we’re still undecided as to if, when, and why, it’s the hottest topic on the blogosphere, and due to the new screen size, commentators haven’t been able to make their mind up as to how apps would work. Each and every app would need to be redesigned for the new device, otherwise they wouldn’t fit properly, and with several hundred thousand apps in total, that’s a great deal of work for developers.

To try and offer an idea of how things might work, TUAW’s Richard Gaywood has downscaled the iOS home screen along with a Safari screenshot, and as you can see, at this size, it could work: 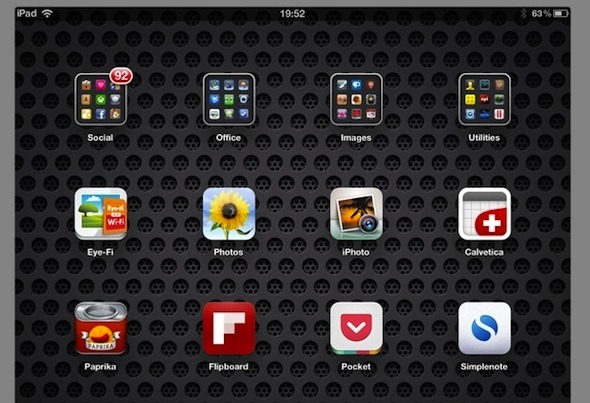 If you visit http://seveneightyfive.fscked.com/ website on an iPad, you’ll be able to gather a fairly realistic sense of how the new screen will look, given that each image on the site has been rendered to fit a 7.85-inch display. Surprisingly, it’s rather easy to get used to the smaller display, and although it’s naturally inferior to the experience of using a 9.7-inch device, it certainly beats the comparatively minuscule iPhone.

Haven given it a try, could you find yourself getting used to a smaller iPad? And moreover, does the idea of a smaller, cheaper device interest you?