With iOS 8.1 finally bringing Apple Pay to supported devices, both Apple and a large number of retailers are scrambling to get deals done and ensure that compliance with the secure, contactless new system is as fluid and seamless as possible. With many thousands of outlets already kitted out with NFC systems that will happily process payments via Apple Pay, there’s already a solid foundation for contactless to prosper, but if you’re perhaps wondering whether your credit or debit card is ready for Apple Pay, the chart below breaks everything down nice and simply.

NFC is not a new concept, idea or technology, and in fact, in many parts of Europe, it’s prevalent and even favored for small transactions. But even though consumers have, for years, paid for goods using contactless credit cards, there’s no doubt that Apple’s new infrastructure is considerably more secure. With the Touch ID fingerprint authentication, Apple Pay could play a significant role in the battle against fraud, and for those still adjusting to the brand-new system that haven’t yet had the chance to test it out properly, your first port of call will be to hook up a payment card; preferably one with some money on it.

Unfortunately, at this point in time, having a card loaded with cash isn’t the only prerequisite for using Apple Pay. While most major U.S. banks have ensured that customers can use the new NFC system right away, Apple is still working alongside many other big names to bring Apple Pay to everybody.

American Express seems to be on top of things, as the table below demonstrates, supporting personal credit and prepaid cards, co-branded cards and small business credit cards, although there are still quite a few glaring gaps in the chart that should soon be attended to. As aforementioned, Apple is working closely with banks to fill in these blanks, and if your issuer has yet to offer support for Apple Pay, it shouldn’t be too long before it does. 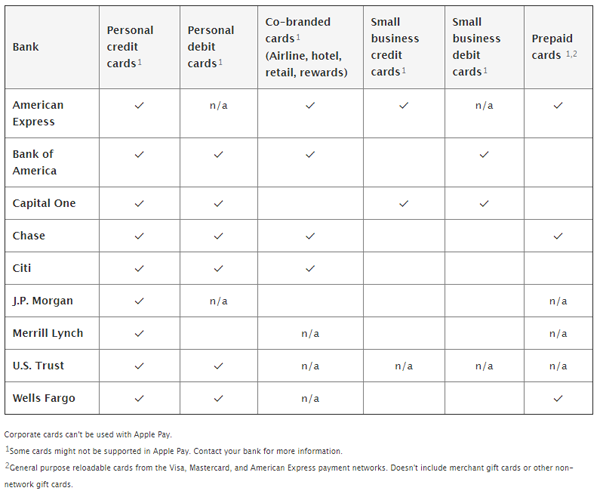 It’s perhaps also worth pointing out that corporate cards can’t be used with Apple Pay, so if you were scanning the list hoping to find such support, this is unfortunately a no-go for the time being.