With the recent announcement of the Microsoft Surface, the tablet market is starting to heat up a little bit with the Surface representing what could be classed as the first real iPad competitor. Until the official price point, full specifications and release strategy for the Redmond company’s latest hardware is revealed, it will be difficult to truly gauge whether or not Apple should be concerned, but, it at least represents a true test of the iPad’s market dominance.

Although Steve Ballmer and the Microsoft crew didn’t go into full technical and pricing specifications of their new gadget, it was clearly evident that one of the aspects of the Surface they wanted to push to consumers was the unbelievably thin protective cover that also doubles as an input device as it contains a fully functional keyboard on the reverse. Although Apple unveiled their magnetic Smart Cover alongside the release of the iPad 2, it doesn’t come close to matching Microsoft’s awesome Surface keyboard cover, although, we shouldn’t forget the fact that iPad owners have the option to connect wireless keyboards to their iPad via the proprietary Bluetooth technology. 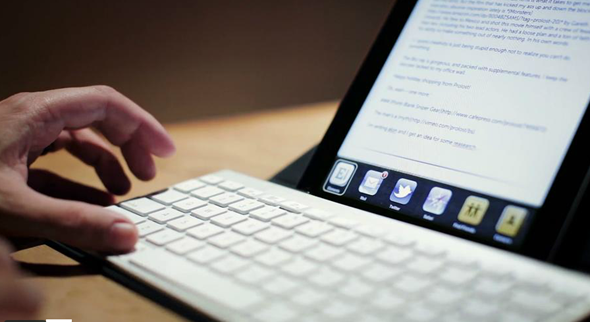 As an input medium, a connected external Bluetooth keyboard functions extremely well but does make things a little challenging when it comes to actually navigating around the iPad. The Surface gets around this issue easily by offering the user a track pad, which is a part of the cover itself, but that is not the case with the iPad, unfortunately. Thankfully, all is not lost, as it seems that a number of undocumented keyboard shortcuts are now available to users which make using the Bluetooth keyboard with the iPad a little more palatable.

Quite a few of the available keyboard shortcuts are actually publicized and will be extremely familiar to those who regularly make use of an attached keyboard. An example of these might be pressing Ctrl+Alt+S to silence the Voice Over function or Ctrl+Alt+H to mimic a Home button press. For those who like to enter into the world of the unknown, then pressing Cmd+Shift+Tab mimics a four finger swipe on the screen and switches to the next app in the switcher tray. On the flip side of that, pressing Cmd+Tab does the reverse and goes back to the originating app while Left+Right quickly followed by Option+Left/Right lets you scroll through the docked items.

The exposing of these few undocumented keyboard shortcuts won’t exactly make using an external keyboard an entirely seamless experience, but it will hopefully serve to make things a little less problematic for those who need that functionality.