HeadphoneLauncher For iPhone: Launch A Pre-Defined App Of Your Choice When You Plug In Your Headphones

The most popular extensions and tweaks that can be found within the Cydia store are generally the ones which add some kind of functionality to iOS which the developer and users believe that Apple should have included in iOS as a standard implementation. Each individual user has their own taste and desire, and therefore expects different things from his/her device, but a lot of times, the majority agree that certain things should have been a native part of the operating system.

The developer of the newly launched HeadphoneLauncher tweak is billing the package as introducing a feature which should have been included in iOS by Apple. The tweak has recently hit Cydia and reacts to the user when inserting a pair of headphones into the 3.5mm jack of their iPhone and iPod touch, doing so brings up a list of apps on the lock screen, which can be launched with a single tap. The ability to launch installed apps directly from the lock screen may prove to be a desirable feature for some jailbroken users, but I can’t imagine that plugging in a pair of headphones would be the desired method of launching apps for the majority of users out there, since the process is somewhat hectic.

HeadphoneLauncher comes with its own configurable options within the native iOS Settings app which allows the user to choose which apps they want present on the lock screen as part of the quick launch experience. Both the user’s apps and system apps can be chosen and can be rearranged in a specific order if desired. Apart from bringing up the quick launcher, plugging the headphones into the jack will also bring up the media controls as well, allowing control of music playback without the need to double tap the Home button. 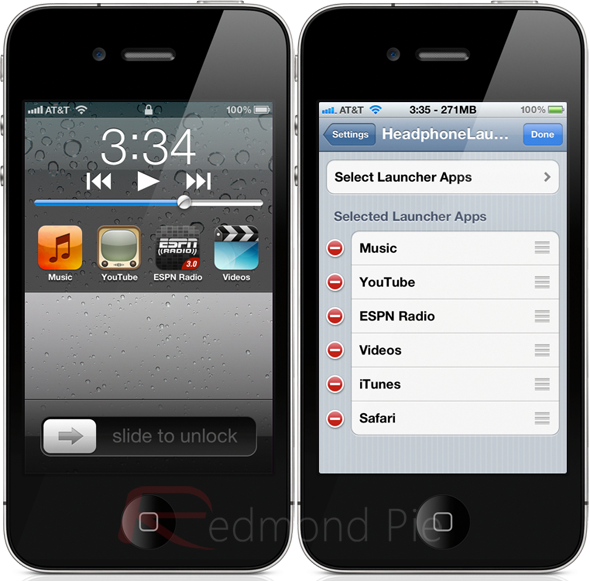 HeadphoneLaunch undoubtedly brings a few benefits to users, but if a person very rarely uses his iPhone with headphones; it would seem like a tweak which would mainly benefit iPod touch owners and those who regularly listen to music whilst browsing the web or flicking through apps. The tweak is available from the BigBoss repository at a cost of $0.99 and requires a device running iOS 5.0 or above.