Only two days ago, Google officially released one of their most not-so-secret products in recent months, a red Nexus 5. Unlike most releases from Google, this one didn’t come as much of a surprise. The red Nexus 5 had been leaked so much that it almost felt like Google were purely putting us out of our misery by officially announcing it. But announce it they did, and order it I did. I’ve personally held off from purchasing the Nexus 5 up until this point because it just wasn’t popping enough for me. The introduction of this color certainly fixes that.

Google introduced this new color addition on the Play Store as "Bright Red." And after unboxing it and having the chance to play around with the phone for a little while, I feel like describing the phone as a Bright Red variation. If I had to describe the color, I’d say neon orange – somewhere in-between a red and orange traffic light. It certainly isn’t a punchy red color like Motorola has supplied as an alternative backplate for the Moto G. 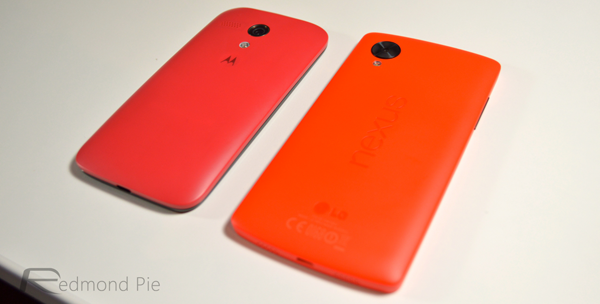 Google’s Nexus line of stock Android devices always marks one of the most important releases of the year – especially for handsets. The Nexus 5 is no different. After only 4 months, it has quickly made its way into every phone lover’s heart. The most interesting thing about the Nexus 5 – apart from the fact that it runs a stock version of Android KitKat – is that the handset comes in at a very low price directly from Google. A 16GB variation of the phone can be purchased from the Google Play Store for only $350 in the US, or £299 for people like myself in the UK. This is a fantastic price for a cutting edge smartphone, making handsets like the iPhone 5s look positively pricey.

The big story here, is not what is in the box of the new Nexus 5, moreover what the new color looks like. As seen in the video above, it’s slightly too bright for my taste, but I’ll have to see if I accustom over time.

One thing is for sure, it’s a slight shock coming from something as classy as the silver HTC One.