Join us as we go hands-on with iOS 11 beta 3 and the changes and improvements Apple has added in the third developer beta of iOS 11 in this video.

Apple has released its 3rd developer beta update for iOS 11 this week, which brings quite a few improvements. This time around, we don’t have much that is new but rather speed improvements and more bug fixes. In what follows, we explore what the latest release adds to Apple’s mobile operating system. 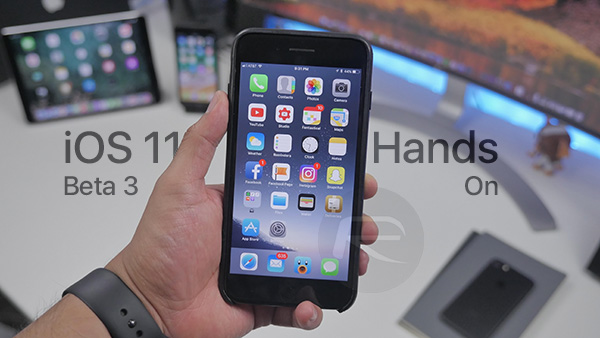 Control Center Fixes/Changes: Music widget now takes you to the app when tapping on the Now Playing section or using 3D Touch on the album artwork, title, or song. In addition, apps in Control Center got a small change with some apps such as Camera and Notes displaying icons on the side of the options that appear when 3D Touching them.

Apple Maps: When using Apple Maps, you can double-tap, hold and swipe up or down to zoom in and out of maps. This feature has actually been there since the initial iOS 11 developer beta launch, but I just found out about it and thought it was worth mentioning.

App Switcher: iPad users are now able to swipe up to close out apps as opposed to pressing and holding the cards and then tapping on the “x.” Swiping up to dismiss app cards on iPhone is much less buggy this time around as well.

iCloud Settings: There is now a new option to enable/disable syncing of Messages in iCloud settings. This feature allows you to sync messages across all devices you have your iCloud account signed into so that when you delete a message on one device, it’ll delete across all devices.

These are just a few new bug fixes and improvements we found that were worth mentioning. With beta 3, iOS 11 feels a lot more stable and smoother. Let us know if you found bug fixes or other changes worth knowing about.

Be sure to check out the video below for a hands-on with iOS 11 beta 3.