Rockstar Games has just released three more trailers of its upcoming Grand Theft Auto 5 title, once again offering fans of the series a firsthand look at some of the stunning and visuals and animations set to make the cut for the September release. Despite the initial spring GTA 5 release date being pushed back considerably, Rockstar has done its utmost to keep everybody just as interested, and as well as these new teaser clips, the developer/publisher is also running a casting competition for five lucky winners to be featured in the game itself!

Although we’re quickly approaching the next generation of games consoles, there’s no doubt that the visuals of titles released on the current hardware have greatly improved as time has gone on, and GTA 5 is seen as the epitome of just how realistic things can get. Time and again we’ve seen trailers and screenshots of this aesthetic masterpiece, and although it’s still a fair few months off releasing, I must personally admit to getting more and more captivated with each new teaser.

The three clips released today focus on Michael, Franklin and Trevor, three of Grand Theft Auto 5’s main characters. The first, which offers an insight into Michael’s life, finds a man having something of a mid-life crisis, trying to balance family life, work, and a yearning for more from his life.

The second clip meets Franklin, a gangster often caught up in his fair share of confrontation and street warfare whilst also trying to steer well clear of the police.

The final clip takes a look into the life of all-American drug lord Trevor, whose forte seems to be indiscriminate violence. As you can imagine, these clips feature quite a lot of profanity, so in watching, please note that these are not for minors, you’ve been warned:

Even more exciting than the clips, however, is the fact that Rockstar is running a competition for five lucky fans to become in-game characters. Specifically, they’ll be members of the in-game Epsilonism religion, which is a play on Scientology, and by providing a mugshot and sending it in to epsilionprogram.com, you too could be a pilgrim of this brand-new religion. 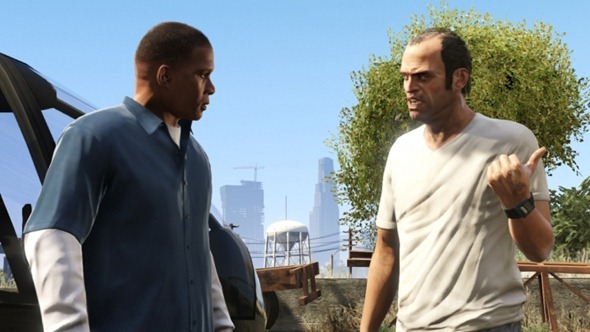 Grand Theft Auto 5 drops on September 17th for both Xbox 360 and PlayStation 3.