Although Skype is the foremost company when it comes to VoIP telecommunications, a host of companies – namely Google, have been working contemporaneously plugging similar services for a number of years now.

Acquired by Microsoft for an eye-watering $8.5 billion last year, Skype, or specifically, Skyping, has become synonymous with the act of making calls online to friends, relatives and business associates. Off the back of the success of the Estonian-founded company, Google launched its Voice service back in early 2009, which has since evolved into a very tidy alternative, offering perks such as voicemail, free SMS, call history, conference calling, call screening, blacklisting, and voice transcription to text of voicemail messages.

The corresponding app for smartphones has fared well on the Big G’s own Android platform, and despite some initial resistance from the guys over in Cupertino, the iOS iteration now also sits proudly amongst the near 600,000 apps in Apple’s coveted App Store.

As you’d expect, though, the updates for Android users always precede the releases of newer versions for iPhone, iPad and iPod touch users, and the latest is no exception. The updated version of Google Voice is now available for download over at the Market, and brings a slick new Ice Cream Sandwich-style interface, complete with a fetching new icon for the springboard. Another handy new feature is the implementation of asynchronous SMS sending, meaning one can send messages to offline users, and they will simply push through once said user rejoins the tech world. More details after the jump! 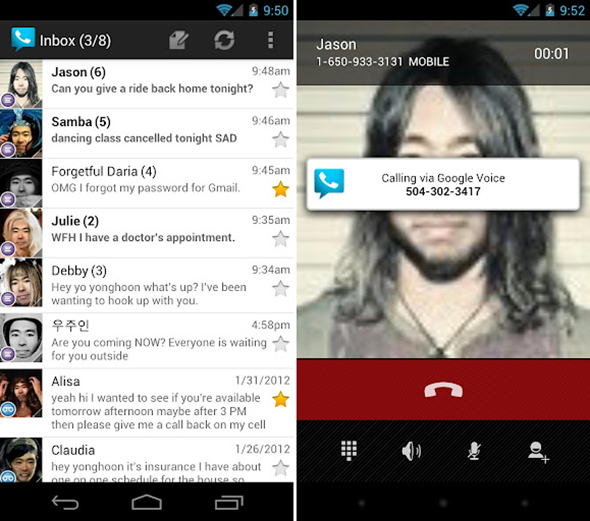 As well as the SMS tweaks and the vanity house changes, there’s an assortment of bug fixes contributing to a hopefully smooth experience. Google would dearly like to hear your feedback on the updated app; we know this since each screen links to its official user feedback menu. Although providing feedback can often seem like a waste of time, but this of course is a great way to raise flaws for amendment in the next update.

You can download the app straight from the Android Market link below, and even if you don’t fancy giving Google your two cents, feel free to leave your opinions and critiques of the app via our Facebook and Google+ pages – also below.