Google Play Store APK version 4.4.21 has been leaked, and is available to download for most Android devices right now.

if you’re tired or waiting for Android 4.4 KitKat in particular, then you can now at least get a piece of the pie without having to wait for Google to make the whole shebang available to all. Today, the Google Play Store 4.4.21 update is available to anyone who wants to download it, giving users the chance to upgrade ahead of Google’s own planned roadmap. If being able to flaunt the latest version of the Google Play Store sounds like your bag, then you’re going to be hitting that download button.

As far as updates to the Play Store are concerned, there’s nothing really all that interesting to report as yet. The most noticeable change here is that Google has done away with menu-accessible navigation buttons in favor of a slide-out panel, which is certainly the design angle that most mobile developers seem to be going for these days. It’s something that was perhaps first really prevalent on Microsoft’s Windows Phone platform, but both Android and iOS now take advantage of slide-out panels in order to reveal menus and the like. 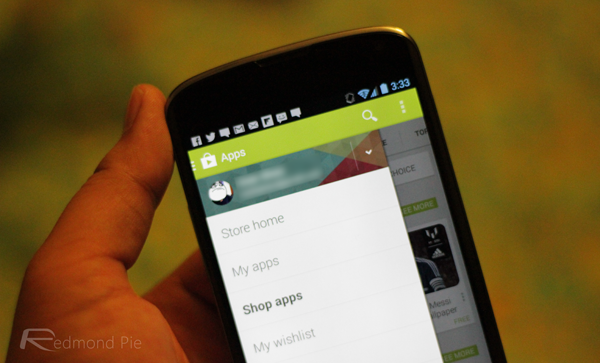 The timescale for an official release of the Google Play Store 4.4.21 is unknown at this point, but it’s a fairly safe bet that it will launch alongside Android 4.4 at the latest, and perhaps even before that, if we’re lucky enough. It’s compatible with everything running Froyo and beyond though, so you’re good to install it right now on your device from the link which we’ve embedded below. Take it for a spin and let us know in the comments section below what you think about the new changes.

As for Android 4.4 and the Nexus 5? Expect to be hearing from Google sooner rather than later. And we will of course cover the announcement here, so stay tuned.