The news comes from TechRadar UK – a blog dedicated to consumer technology news – in a post where they talk about the recently set up Chrome-branded stores in London.

These aren’t exactly stores per se, as they are actually “zones” inside much, much larger superstores. Google calls these zones “Chrome Zones” and, as of today, two of them have become operative; one each, inside Currys and PC World on Tottenham Court Road, London.

Google has opened these Chrome Zones to explain the advantages of cloud computing and cloud-oriented Chromebooks to the general public.

Google has launched a ‘shop-within-a-shop’ at the flagship Currys and PC World superstore in London’s Tottenham Court Road in order to sell its Chromebooks.

The Chrome Zone has been daubed with a primary Google-style brush, and will look to explain the cloud OS notebooks to the general public.

Currently, only Samsung’s Chromebook Series 5 are on display, as Acer’s AC700 Chromebooks are yet to launch in the United Kingdom.

People who enter the zone are informed of the advantages of using a Chromebook over traditional PCs by trained staff members. The zones make heavy use of the colors blue, red, yellow and green, which gives the zones the signature Google look. 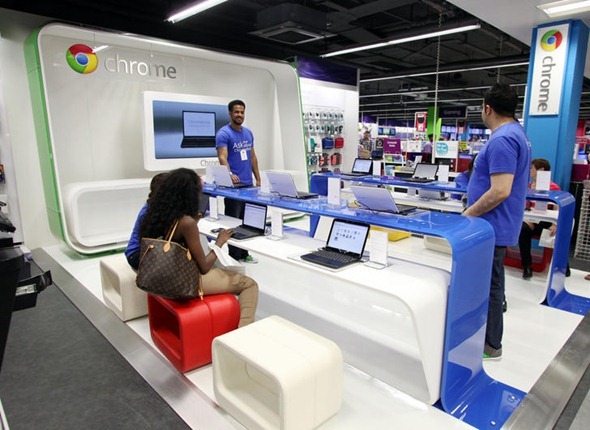 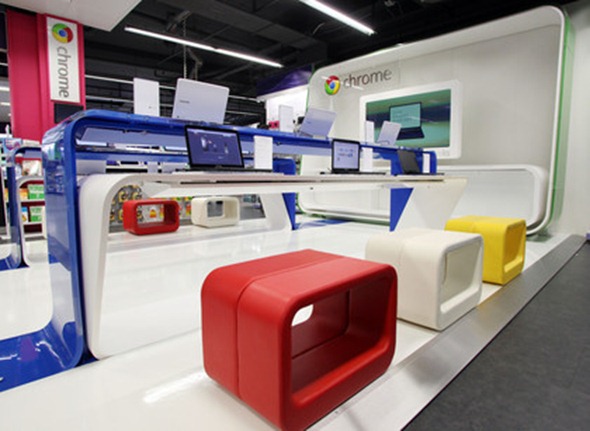 Chromebooks were launched in June this year after being announced at Google’s I/O Conference the preceding month. These netbooks are based on Google’s cloud-oriented Chrome OS and, according to Wikipedia, comprise a distinct class of personal computers which fall between pure cloud clients and traditional laptops.

Being so very “cloud-oriented” has its advantages and disadvantages. All your data is stored up on Google’s servers (or “the cloud” as it is popularly known) and, as such, is always backed up and can be accessed from any computer. Since Chrome OS is essentially a web browser from which you access all your (web) apps, it boots up quickly, all your software is updated automatically and everything just feels “snappy”… that is, until you have a fast internet connection. Without one, Chrome OS based computers become useless paperweights.

Response to Chrome OS and Chromebooks has been mixed so far because of their limited functionality. Critics rightly believe that one can get benefits of the cloud while enjoying powerful native computing from OS’s like Jolicloud.