While the cool thing to do is typically compare S Voice or Google Now with Apple’s own personal assistant, Siri, Clayton Ljungberg of AndroidAuthority has decided to pit the two brotherly voice assistant services to see which one is the best.

Both devices have an easy way to get to their respective voice assistant. To launch Google Now, you simply hold the home button and swipe up, and, to launch S Voice, simply tap on the app icon, or assign a wake command (such as "Hi, Galaxy", which is the default). The video kicks off with Ljungberg testing out navigation. Asking for directions to the Holiday Inn in Seattle, S Voice brought up the navigation app, bringing you right to the action. Google Now on the other hand retrieved an online Google Search, meaning extra taps to view the actual directions (however, there’s apparently a command that can be used to instruct it to bring you directly to the app). 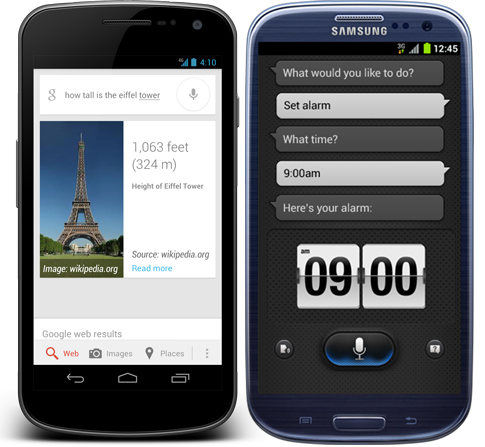 Next, he tested out the alarm functionality. Both S Voice and Google Now set an alarm within the actual alarm app at around the same time, showing the responsiveness of both services. He then proceeded to try a web search. S Voice misinterpreted the command, but took him to a proper web search area. Google Now on the other hand properly understood the dictation, but didn’t take him to an actual web search. Finally, he tried performing a search on YouTube. Google Now conducted a proper search on Google for the video, while S Voice couldn’t understand the command to search YouTube for a video.

So, as you can see, they both have their pros and cons.

To be fair, I’m rooting for Google Now to improve and eventually beat out S Voice in performance personally. I’m not a fan of OEM products/services, and the similarities between S Voice and Siri are staggering. I want the proprietary voice search solution to emerge the "winner" here.

What are everyone’s thoughts on this? Which personal assistant/voice search service do you prefer? Let us know in the comments on our Facebook and Google+ pages!