Google Maps for iOS has been bumped up to version 1.1 with a plethora of changes, including the ability to search through Google Contacts and find local amenities by category, among other minor alterations. More details, as well as that all-important download link, after the jump.

The search company’s Maps offering for iOS was a particularly significant release because, in ousting the native Google Maps app from its software roster, Apple had replaced it with a lackluster, largely inaccurate effort of its own. After several months in limbo, Google finally delivered the goods, and although we’ll always miss the original, stock Maps from the Mountain View-based outfit, the third-party iteration is certainly none too shabby.

The welcome changes to Google Maps for iPhone, iPad and iPod touch include a feature which allows you to search your Google Contacts using Maps. Simply sign in, and your saved addresses will immediately show up when you run a name search for friends or family members.

Also in the mix is a nifty new feature allowing you to search for local places by category, including bars, restaurants, cafes, cinemas, gas stations and so on. If you prefer to use imperial measurement of Miles instead of Kilometers, you can now flit between the two to suit your particular preference, although Google does warn in the release notes that not all features will be available in every country just yet. 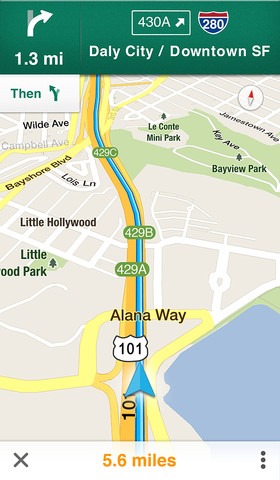 We suspect many of you have jumped straight on the bandwagon when Google Maps was released for iOS back in December, but if Google Maps does not yet grace your home screen, now would be as good a time as any to download it.

It is, as ever, absolutely free, and having given the new version a brief run out on an iPhone 5, we have yet to stumble across any noticeable bugs. The ability to find Google Contacts is probably the highlight of this update, and just goes to show that, even on iOS, Google can continue to pull consumers towards its expansive range of Apps.