Google has finally published the full technical specifications of Glass, alongside Mirror API for apps, and MyGlass companion app for Android on the Google Play Store.

According to the official specs, Google Glass features a 640 x 360 display which is equivalent to that of a 25-inch high definition screen from around eight feet away. It sports a 5 megapixel camera which can record videos in 720p HD. It also houses 16GB of flash storage, which is synced with Google cloud storage, although only 12GB of useable memory will be available on board for actual use.

Interestingly enough, the battery life on Glass will last you “one full day of typical use” but doing things such as recording videos and Google Hangouts will drain it faster. It supports connectivity via 802.11 b/g Wi-Fi and Bluetooth interface, and will be compatible to work with any Bluetooth capable phone. 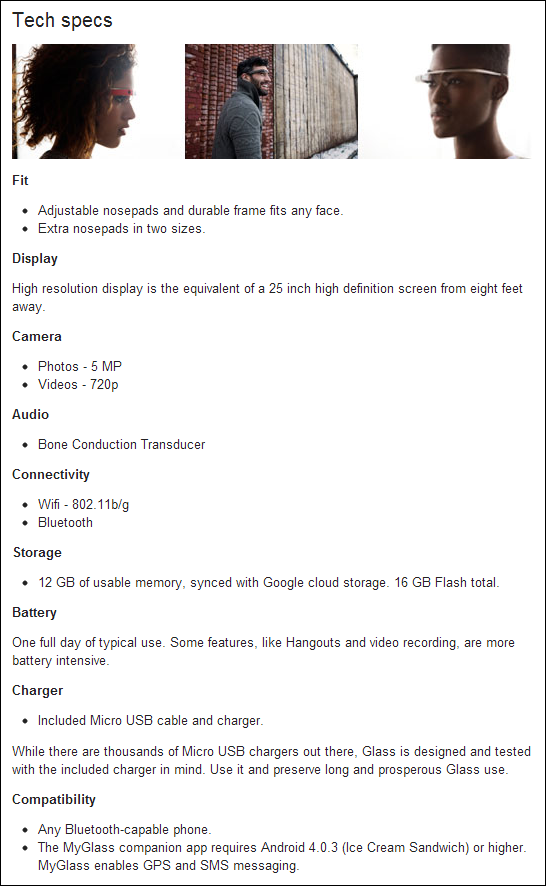 Also available today on the Play Store is the MyGlass companion app for Android which requires devices running Android 4.0.3 Ice Cream Sandwich and above. This app basically allows you to manage and configure your futuristic Glass frames right from your Android phone. Google also cheekily reminds us that the app does nothing if you don’t have a Glass unit:

If you don’t have Glass, then downloading this will be a waste of time. Sorry about that.

At the moment there is no official word on iOS version of the app. But it’s likely that we will see an iPhone version of MyGlass once Glass hits retail shelves later this year.

MyGlass companion app for Android can be downloaded now from Play Store. 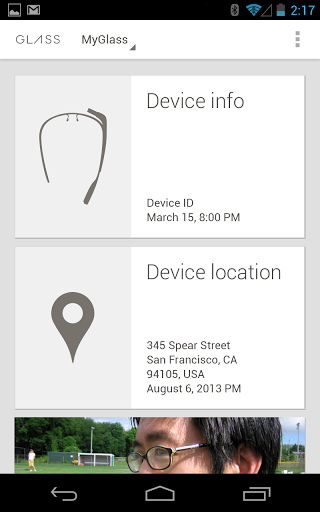 Earlier today, Google sent out emails to the lucky members of Glass Explorer program to inform them that the production of first batch of Glass units was complete, and that they will be shipping it out in the next few weeks.

We know you’ve been standing by patiently to get Glass. So, instead of waiting for all the devices to be ready, we want to start delivering them to you now. We’re producing enough for everyone, but only a portion of them are ready today. Therefore, we’ll be notifying you in waves, and as soon as we’re ready to invite you, we’ll let you know.

To see what Google Glass is actually capable of, check out the “How It Feels [through Glass]” video embedded below: