Google’s Glass Project has come along in leaps and bounds over the past year, and even though Team Glass only recently pushed through an update packing some great new features, a couple more have just been added. As revealed in a post on the Project’s official Google+ page, there’s now SMS support for those on the Apple iPhone, and additionally, the new Calendar Glassware feature allows Explorers to edit, delete and RSVP events from the agenda with ease. Full details can be seen right after the break.

Naturally, given that Glass is a Google Project and all, those on Android tend to get priority when it comes to new features and overall integration. But the Project Glass team also recognizes that the smartphone of choice for many of those wielding the Explorer edition of the face computer may well be the iPhone, and as such, has catered to this group with newly-added support for SMS on iPhone. 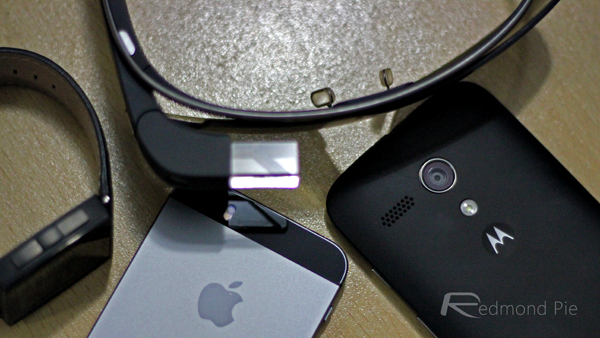 As the feature rolls out this week, those in ownership of the iPhone on iOS will be able to see new notifications from the Messages app directly on their devices, and although said users will not be able to reply – due to, as Google puts it, “some limitations with iOS” – it’s certainly great to see integration with the iPhone being furthered.

SMS has been a long-standing feature to Glass users on Android, and although it’s unlikely that the iOS ecosystem will ever achieve parity with its Google counterpart where features for Glass is concerned, at least the Big G is making the effort to diversify its target audience.

Also arriving as per the G+ post is Calendar Glassware, which is situated on the Glassware tab in the MyGlass app. This new feature allows you to manage, edit, add and respond to your events using Glass, as well as delete certain entries as and when you wish to dispense of them. 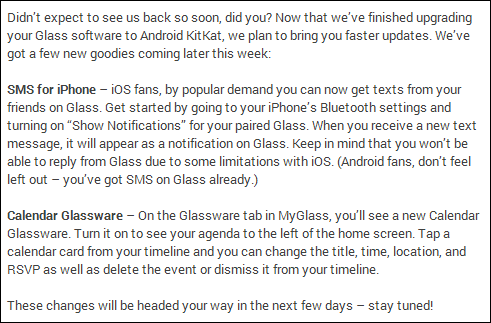 The team behind Project Glass has promised that these exciting new features will begin to roll out “in the next few days,” and so if you happen to be a Google Glass Explorer, be sure to keep an eye out for their arrival.