Shortly after announcing their fourth quarter earnings, Google announced that their Co-Founder Larry Page is going to replace Eric Schmidt as CEO of the company. Schmidt is going to takeover as Chairman of Google.

For the last 10 years, we have all been equally involved in making decisions. This triumvirate approach has real benefits in terms of shared wisdom, and we will continue to discuss the big decisions among the three of us. But we have also agreed to clarify our individual roles so there’s clear responsibility and accountability at the top of the company.

Larry will now lead product development and technology strategy, his greatest strengths, and starting from April 4 he will take charge of our day-to-day operations as Google’s Chief Executive Officer. In this new role I know he will merge Google’s technology and business vision brilliantly. I am enormously proud of my last decade as CEO, and I am certain that the next 10 years under Larry will be even better! Larry, in my clear opinion, is ready to lead.

Sergey has decided to devote his time and energy to strategic projects, in particular working on new products. His title will be Co-Founder. He’s an innovator and entrepreneur to the core, and this role suits him perfectly.

As Executive Chairman, I will focus wherever I can add the greatest value: externally, on the deals, partnerships, customers and broader business relationships, government outreach and technology thought leadership that are increasingly important given Google’s global reach; and internally as an advisor to Larry and Sergey. 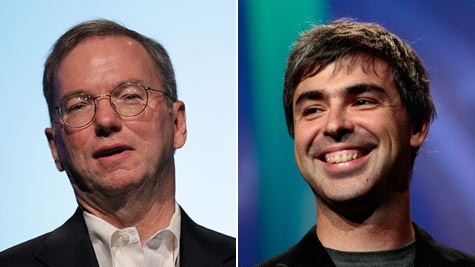