Google’s Chrome web browser has been taking the geek world by storm for some time now, even spawning Google’s somewhat failed attempt at making the browser the whole operating system with Chrome OS, but the truth is that what many would term ‘normal people’ just don’t use it.

With business using the widely supported Internet Explorer, often simply because it comes bundled with Microsoft Windows, browser traffic numbers have historically shown that IE has led the way in usage with various third party solutions making up the remainder. Google’s Chrome is amongst that remainder, but it has been steadily gaining in share. Now, according to StatCounter, Google Chrome is officially the most popular web browser in the world.

Until now, Chrome has seen itself outpace Internet Explorer only at weekends, probably due to all those office workers being at home, hence less clicks originating from Microsoft’s browser. With everyone at home, and able to choose their own web viewer, Chrome takes the lead.

Now though, Google Chrome is also taking the lead throughout the working week, which means that the relative newcomer has seen its first seven day stretch as the most used web browser on the planet.

Breaking down the numbers shows that the reason for Google’s new dominance is the extremely heavy Chrome usage coming out of South America. According to the figures offered by StatCounter, Chrome accounts for fully half of all web browsing that goes on in the region, making up for the proliferation of Internet Explorer-powered clicking that happens throughout the rest of the world. North America is especially happy to stick with Internet Explorer, with two-thirds of clicks coming from Microsoft’s solution. We suspect this could be explained by the number of businesses in North America, each pushing usage skywards for the browser that comes bundled with Windows. 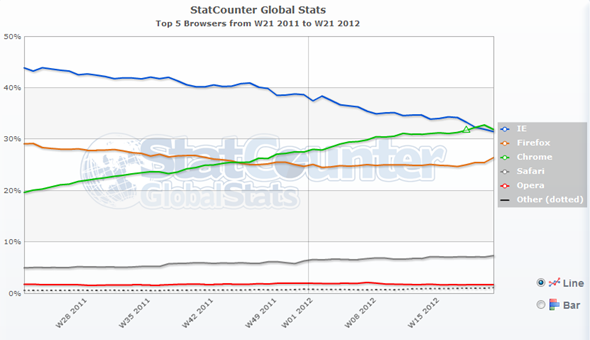 Regardless of Chrome’s newfound glory. it is clear that Google has managed to produce a very popular app, and given the fact that it needs to be downloaded by the user, rather than coming packaged in with an operating system, the feat is even more impressive. One thing is clear, Chrome is very much in the ascendancy, and Microsoft will need to really up its game if Internet Explorer is to regain the hearts and minds of the home user.