Gmote App Streams Music From Mac/PC To Android Phones, Can Turn Your Device Into A Full-Blown Remote For Your Desktop Computer

Smartphones today are considered as the ultimate examples of ever-converging technology. These devices play our music, take high-resolution photos, record full HD video, play HD video games, double as a bright flashlight, surf the web and, of course, act as a phone. It was only a matter of time before these smartphones became a full-fledged remote control for other devices such as a desktop computer. Gmote – the app we’re discussed in this post – does precisely that. It received a major upgrade recently and we’ve covered its main features after the break!

Control your computer’s media player from your phone. Stream music to your phone

Turns your phone into a remote control for your computer, allowing you to start and control movies and music at a distance.

We’ve tested the app on a Samsung Galaxy S II and can confirm that it works as advertised. Gmote is one of the most powerful apps we’ve come across recently. As mentioned before, it basically turns your Android device into a remote of sorts for your Windows/Mac/Linux-powered PC. You can go through your desktop’s music library, play it on your Android device, stop/start/previous/skip songs and videos playing on your desktop, control Microsoft PowerPoint, launch websites and, finally, even use your device’s touchscreen as a touchpad or a keyboard! 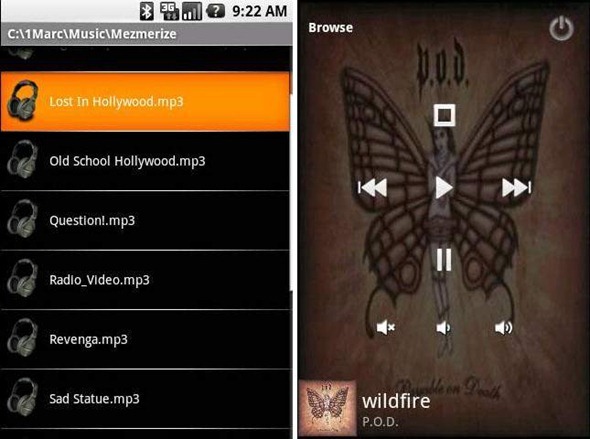 Gmote is available in two versions: a free version which comes with all features built-in and a $2.99 “donate” version for those of you who liked the app and wish to support the dedicated developer behind Gmote. You can download the version of your choice along with its desktop client (which is required for the app to work) from the links embedded below.