New and exclusive features are aplenty in the swiftly-evolving world of Android, but thankfully for those don’t have the latest device and / or firmware version, the modding community is on hand to deliver those new niceties to those rocking an older device or software. For example, the Galaxy Note II has brought with it a very exciting, infinitely useful multi-window feature, but unless you happen to be in ownership of the phablet sequel (or an S III running the currently OTA-ing Android Jelly Bean 4.1.2), there’s no way for you to enjoy this multitasking marvel; or at least there wasn’t until today.

The folks of XDA Developers have done it again, and the swift port of the multi-window feature to the rather dated (but still very useful) Galaxy S II is now everyone’s to behold. Sure, it doesn’t have a colossal display to fully capitalize on the powerful function, but it’s large enough, and apparently, the mod works fairly seamlessly.

XDA Senior Member mythtrandyr put in the hours, and there are a couple of ways you can get the mod onto your old S II. One way is the perceived "clean" method, while the other has been labeled the "dirty" method. In the case of the latter, one is required to decompile the SecSettings.apk, service.jar and android.policy.jar files in order to apply the relevant mods.

But we like to keep thinks as easy-to-digest as possible here at Redmond Pie, and strongly recommend the clean method, which involves little more than a simple flash. The only prerequisite is that the S II is running a deodexed ROM based on XXLSJ, or in layman’s terms, Android 4.1.2. 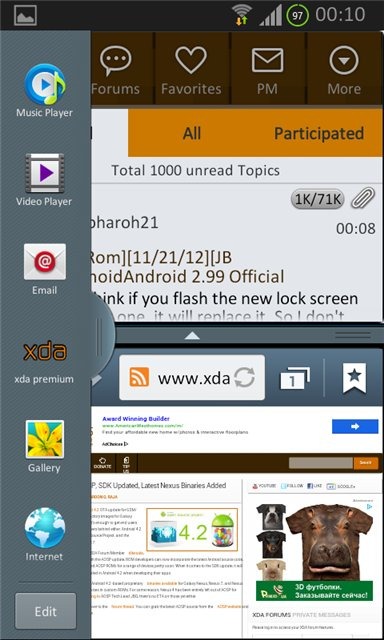 As well as the multi-window feature, you also get one or two other nice little additions, such as the 4 icons shortcut on lock screen and the ability to skip songs with volume rocker, among others.

This is not some half-baked port laden with bugs, it’s the real deal, and once you’ve successfully installed it, you can enjoy the full-on multi-window functionality, with all the bells and whistles associated.

To get started, simply check out the dirty method or clean method from the link at the foot of this post, and make sure you follow all instructions carefully so as not to mess anything up.