The Android OS is obviously one of the most advanced mobile platforms out there, available across a broad range of devices from various manufacturers with the option of choosing from hundreds of thousands of additional apps from third-party developers. The standard features that ship with Android – especially with the current offering which is Ice Cream Sandwich – are more than enough to entice even the most demanding of users to move across to Android, but when those features are combined with additional applications and widgets; the whole experience becomes even more attractive to consumers.

The use of widgets won’t really come as anything new to Android users as they are currently used quite often throughout the OS to provide different sets of features and quick access to certain things. Widgets are often favored over full-blown apps due to their versatility and the fact that users can position them on a desktop for example instead of actually having to launch the app to benefit from the features. The majority of mobile device users will no doubt also be familiar with Google’s Gmail email service, which is one of the world’s most popular options for a free of charge email service. Developers across multiple platforms have developed widgets which hook with the Gmail app, however, it is sometimes a difficult task to sift through the trash and find one that is functional and attractive, making sure it compliments the OS it is installed upon. 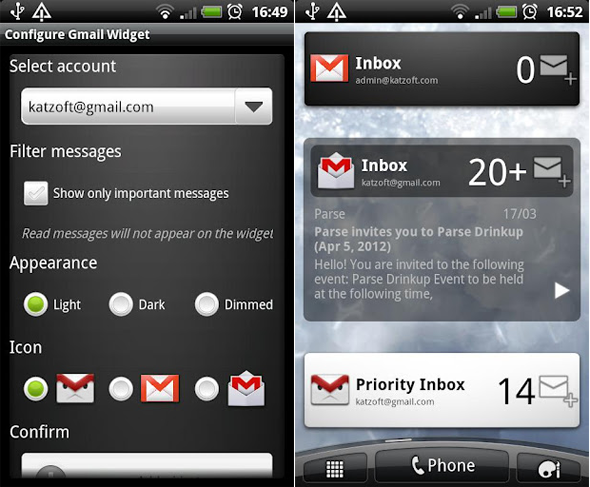 Gmail Widgets, developed by Katzoft has recently benefitted from a major update to version 2.0, which is available now to download through the Google Play Store. Gmail Widgets offers multiple types of homescreen widgets for Android devices and gives users the ability to see how many unread items are pending as well as providing the useful ability to see a quick sneak preview of the available mail item. This type of functionality is available as standard on Honeycomb and Ice Cream Sandwich, but Katzoft is pushing these widgets as bringing the same functionality to older versions of Android, meaning users still running Froyo and Gingerbread can benefit from the Gmail Widgets goodness.

Gmail Widgets is certain a very functional offering and with the highly customizable nature of this software, it should definitely appeal to those who are regular users of Gmail, but who are still using a device which cannot be upgraded to the latest version of Android.

e sure to check out our Android Apps gallery to explore more apps for your Android device.