Although nothing should ever be taken for granted in the run-up to a new release from Apple, the tech world seems fairly convinced of which shape the next iPhone will take. Last year, the blogosphere was most certainly fooled by the prospect of an "iPhone 5," and left somewhat disappointed by the largely unchanged iPhone 4S, but this time around, there is a great deal of evidence suggesting we’re closer to the mark this time around.

The iPhone 5 is expected to keep a similar form factor to its predecessor, but there will be certain changes rendering it greatly discernible from the Cupertino’s current flagship. The dock connector, for example, is expected to be cut down significantly (30 pins to 19, 16, or 8 depending on which reports you believe), while the headphone jack is thought to be moving from top to bottom, where the speaker grills could also look a great deal different than they have done.

The main change, however, is the display, which looks as though it will finally break the 3.5-inch mold of every iPhone iteration hitherto. The fruit company has stuck religiously with the size of the screen, but with Android and Windows Phone manufacturers offering a great deal more real-estate to consumers, it seems as though Apple has decided now is the time to up the ante.

It won’t be a Galaxy Note, by any stretch of the imagination, but it will be nearer the 4-inch mark, and it will be a noticeable difference compared with the iPhones released since 2007. Now iPhone parts outfit ETrade Supply has compared the alleged new front panel with that of the iPhone 4S, and as with most leaks we’ve seen previously, it includes that elongated display and repositioned FaceTime camera, which now sits centrally. 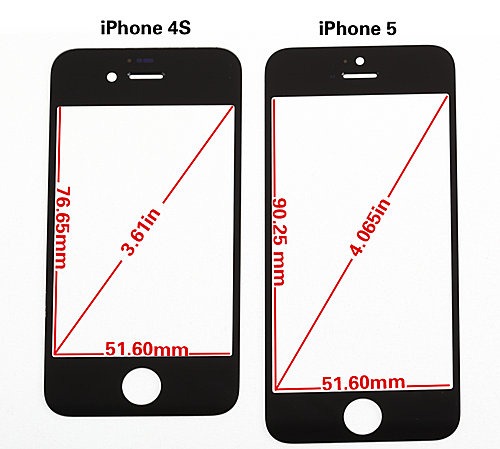 As well as the obvious differences, ETrade has also discovered the display is 0.1mm thinner, gives more light transmittance than the iPhone 4S, and presents better scratch resistance than the current device. In addition, the hole for the home button is 0.3 mm smaller in diameter than the iPhone 4S, and the distance between the bottom of the display and the foot of the device is also reduced by 2.6mm.

You can check out the full video of the comparison here:

It seems legitimate enough, and if this is indeed the front panel of the next device, it would seem Apple is paying more attention to detail than ever before.