‘Friends Mix’ For Apple Music Rolling Out, Creates Playlist Of Songs Your Friends Are Listening To

If you are an Apple Music subscriber, then you may have noticed that there is a new weekly playlist rolling out called “Friends Mix” although it appears to not yet be available to everyone.

The newly curated list will be filled with songs that Apple knows your Apple Music-using friends are listening to, potentially improving content discovery.

While Apple could likely have just created a playlist and left it at that, the interface for the whole thing is actually a little smarter than that. Alongside each song in the playlist users will also see a profile picture of the person Apple has pulled the song from, giving some context to the tracks that will be appearing on users’ iPhones, iPads and Macs.

The playlist itself will be updated every Monday and will include 25 tracks each time. In this regard it mimics the standard weekly playlists that Apple Music already offers, except this new one will be more finely tuned to users’ listening habits. Assuming their friends listen to the same kinds of music they like, of course.

Apple started to allow users to build their own Apple Music profile last year as part of the iOS 11 update, giving them the opportunity to have songs and albums shared with their friends when they are listening to them.

That was clearly the catalyst for this new playlist and puts new music recommendations into one place, meaning users can pick up on what their friends are listening to at will. 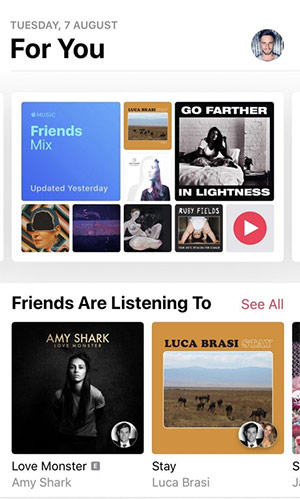 Anyone wanting to see what their new Friends Mix playlist looks like can head over to the For You tab in Apple Music. While this does not yet appear to be available to everyone as yet, those who do have it appear to be using Apple’s latest iOS 12 beta so this may not become available to all until some point next month.