Fortune’s Global 500 Declares Apple Most Profitable In The World

Most consumers and individuals who purchase products are only really interested in the type of work that companies are doing, including the quality of products they are shipping and the levels of product and service innovation being shown.

After all, that’s what we pay our money for.

However, others are interested in how a company is performing financially, meaning that Fortune always finds an audience for its annual Fortune 500 ranking of global businesses. Cupertino-based Apple Inc. has found itself in ninth position in this year’s list based on revenue, but number one on sheer profitability.

Most people see Apple as a money generating machine, and in some respects, they’d actually be right. Apple managed to find itself in ninth place on the global list with an annual revenue of $215 billion based on its most recent fiscal year results. An income of $215 billion is seriously impressive for a company that generates the most revenue from a single smartphone device, and while it was only enough to earn Apple ninth place on that list, the profits on those revenues amounted to $45 billion, which put Apple Inc. firmly in first place.

After more than a decade of solid growth fueled first by the iPod music player and then by the even more popular iPhone, Apple finally appeared to hit a wall, with lackluster sales “relatively speaking” for other products such as the iPad and Apple Watch and a heavy reliance on upgraded phone models. But the most profitable publicly-traded company in the world is investing heavily in software and its efforts in new areas of opportunity, including automobiles, remain in development (and under wraps). 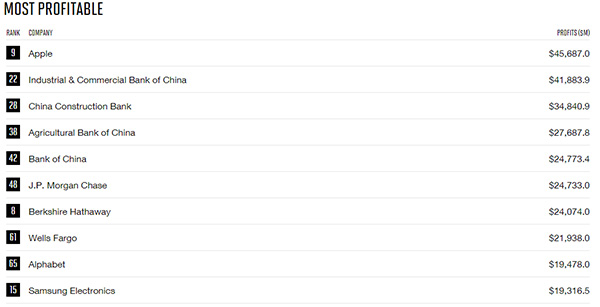 The rest of the Fortune 500 actually makes extremely interesting reading. Walmart finds itself sitting at the top of that list with annual revenues of $485 billion, but sits 17th in terms of profitability with huge overheads that only left $13.6 billion in profit. Apple was also listed as the world’s most admirable business despite having falling profits of 14.4% year-over-year. With Apple investing heavily in other areas, it will be extremely interesting to see if it can manage to get those revenues and profits on the up-and-up and become the first business to be valued at a trillion dollars.