Flipswitch Is A Wonderfully Done Centralized Toggle System For iOS

The jailbreak scene is an ever changing landscape. What’s new, noteworthy and popular on any given day can easily be cast into obscurity on the next, leaving space for a new package to step into the limelight and gain praise. Over the last few years we have seen a number of powerful and innovative solutions that allow jailbroken iOS users to quickly and efficiently access commonly used system settings without having to drill-down into menu structures within the Settings app. Most of those offerings have come in the form of some kind of modal overlay, or are accessed by other means, but now we have a new centralized toggle system called FlipSwitch and it’s about to take the limelight.

FlipSwitch has gained quite a bit of jailbreak love through social media sites like Twitter over the last few weeks. This is partly due to it being worked on by one of the hardest working men in the scene, that is Ryan Petrich as well as Jack Willis and Sentry from A3 Tweaks (creators of the wonderful Auxo package for iPhone and iPad). Putting aside the credibility of the creators for a minute, it actually stands alone as a great idea for a framework that could ultimately set the standard on how developers implement functionality of this nature in future releases.

Rather than being a tweak that can be downloaded and used immediately, FlipSwitch is more of a lightweight and powerful framework that gives developers the ability to implement systems toggles with minimal effort. Some users love the new and innovative ways through which developers manage to get these toggles into their packages, but there will definitely be a large set of users who would prefer that this framework is used going forward to ensure a certain level of familiarity when new tweaks are released with system toggles built right in.

Petrich has also taken the opportunity to release the SwitchIcons package alongside the new FlipSwitch framework. SwitchIcons isn’t the most exciting or earth-shattering piece of work we have ever seen, but it is a great working example of his new framework in use, and those users who would love nothing more than a home screen full of toggles would class this as a must-have installation. Once again, FlipSwitch and SwitchIcons is another example that innovation and continued commitment to quality still firmly has a place in the jailbreak world. 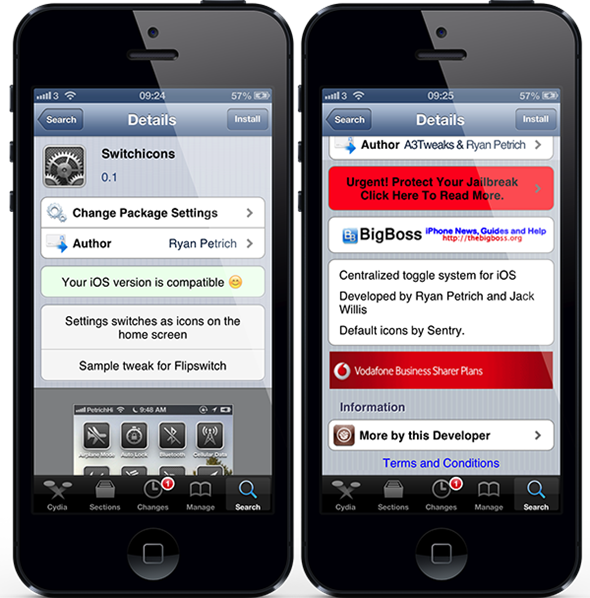 SwitchIcons and FlipSwitch are both available as a free-of-charge downloads from the BigBoss repository.