Let’s face it, we’ve all come across those awkward conversation-crunching typos on our smartphones in the attempt of typing really fast. Then there is the Guinness World Record of 17.00 seconds of typing a finger twisting message on a touch-screen smartphone. Brazilian teenager Marcel Fernandes Filho has just used the Fleksy keyboard on an iPhone 6 Plus to set the record.

“The razor-toothed piranhas of the genera Serrasalmus and Pygocentrus are the most ferocious freshwater fish in the world. In reality they seldom attack a human.”, is not your everyday message to your friends but Guinness uses this as a standard test message for the record setting purpose. 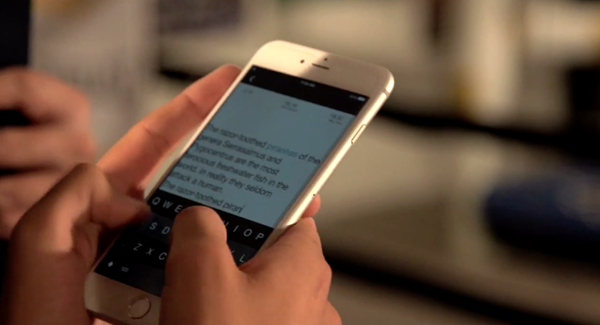 The teenager had apparently beaten his own record which was previously set at 18.19 seconds and had also been set using Fleksy, but on a Samsung Galaxy S4. Now that Fleksy has been made available on the iOS platform with the release of iOS 8, and in order to stand out from the rest, teamed up with Filho once again to have a go at the record one more time.

Fleksy had already gained some traction on Android having been released on the platform for a while and was priced at $3.99. However Fleksy’s release on iOS saw the keyboard app go for a mere $0.99; a price point that most users could not look away from thus helping Fleksy gain the popularity it was looking for. Understanding the difference that lowered price points can make for such apps, Fleksy is looking to gain even more users on the Android platform and has decided to cut down a good 50% of the original price of the keyboard, bringing it down to $1.99.

iOS 8 while having support for third-party keyboard apps, made some much needed improvements to the native keyboard as well, with the introduction of QuickType predictive text. The iOS keyboard, even before the introduction of iOS 8, had always been more accurate and offered a more fluid typing experience compared to other touch-screen counterparts, but with third-party keyboard apps making their way onto both iOS and Android, would that difference in typing experience still remain relevant?