Flaw In Android 4.2 Jelly Bean Misses Out On The Month Of December In Date Picker

We may be fast approaching the fabulous holiday season which the majority of us are looking forward to throughout the year, but it would seem that the latest version of Android Jelly Bean simply does not want Android users to be celebrating. Version 4.2 of Google’s industry leading mobile operating system has been shipped with a rather startling flaw in the date picker control that prevents users from selecting the month of December when adding date information in apps that use the native picker. It might not be the biggest bug we will ever see with shipped software, but it is certainly one that should never have gone live.

With the new Nexus 4, Nexus 10, Nexus 7 and Galaxy Nexus devices running Android 4.2, it is certainly an issue that will be affecting a fairly substantial set of users, especially considering the Nexus 4 sold out almost immediately after going on sale through the Play Store. The issue primarily affects the People app within Android, which is an app that allows users to add new contacts and update and create information for that contact. In its current state, the date picker component jumps straight from November 2012 right to January 2013 and misses out the most enjoyable month of the year altogether.

We have seen in the past issues surrounding dates and calendars actually occuring quite frequently with shipped software. Large organizations like Sony and Microsoft have been noted for suffering from date based trouble on their Xbox 360 and PlayStation 3 consoles. Although they are currently the richest company in the world, Apple has also dropped a few gaffes in the United Kingdom by failing to handle bank holidays and daylight savings time changes correctly. 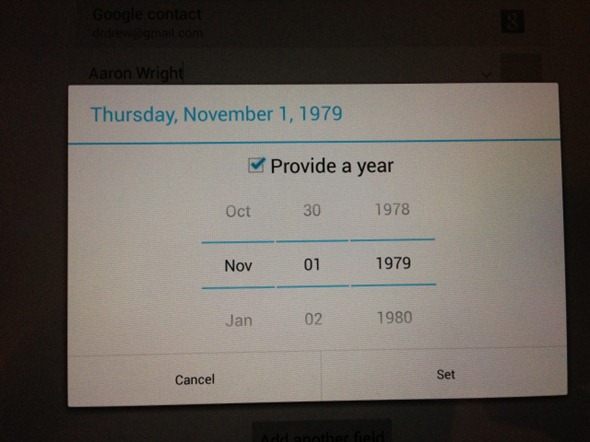 Android 4.2 is relatively new and considering how slow the adoption rates of new versions of Android are, then Google will ultimately escape without too much harm being done. With that said, users will still find it staggering and hard to believe that such a bug as not including all of the months of the year could actually pass through testing and make it into a live build of the most widely used mobile operating system available. If you are one of those who find themselves unable to plan anything during December, then hold tight, as an update is on the way to resolve the issue.