The old saying of “where there’s a will, there’s a way” undeniably applies to the warriors of the Internet. Apple may have recently introduced the fourth-generation Apple TV during its September 9 media event in San Francisco, but the hardware itself won’t actually ship until late October. Andru Edwards, who operates a fairly popular tech-related YouTube channel, doesn’t let minor details like public availability get in the way of a good unboxing video, and has subsequently provided what could be the first glimpse at Apple’s new set-top box and accompaniments.

If you want to jump past the introductions and get down to business then you’re going to want to start at around the 1:00 minute mark of the video, which is where we get our first glimpse of the packaging that surrounds the new Apple TV unit. There’s nothing terribly revolutionary about the new box except that it comes in black this time instead of white for previous generation models. It’s probably best describe as “typical Apple” packaging in that it seems designed to perfectly fit the contents with minimal space waste and all black finish with an aerial image of the Apple TV hardware on the top. 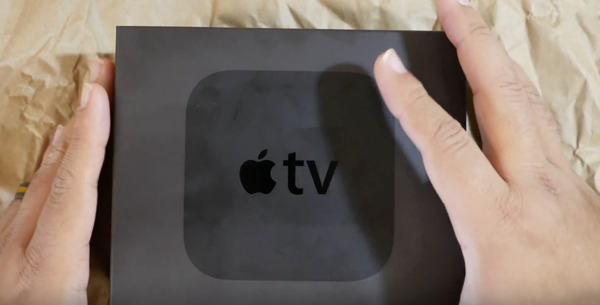 One of the great things about Apple packaging is that as soon as you remove the lid of the box you are immediately presented with the purchased device. No additional stuffing to get rid of. No protective pockets of air of bubble wrap standing between you and your product. Just the beautiful first eye-to-device meeting of whatever it is you’ve purchased. The same applies in this instance with the Apple TV and new Siri remote jumping straight into view when the lid of the box is remove.

Underneath that second layer Apple also provides an accompanying Lightning cable to charge the new remote and a power cable to connect the Apple TV to a power source. Apple clearly believes in the “if it isn’t broke, don’t fix it” design methodology and has chosen to stick with the same design as the previous two Apple TV units, albeit slightly bigger to cater for the revamped internals.

One interesting thing that we didn’t manage to pick up from the media event was the two-tone finish of the new Siri compatible Apple TV remote. The front of the control is finished to match the Apple TV with a black matte polish. The rear however is a brushed metal finish that looks remarkably similar to the back of a silver iPhone or iPad. Check out the unboxing video for yourself and see what you think. Does it raise your excitement levels for this coming October when the 32GB and 64GB variants of the new Apple TV will be released?