Although the Joshua Michael Stern directed jOBS movie is not the official adaptation of Walter Isaacson’s autobiography, it is one of the most-anticipated independent films of recent times thanks to the insight that it promises to give into the life of the iconic Apple co-founder, Steve Jobs. When Ashton Kutcher was first announced as the actor who would be stepping into the role of Mr. Jobs, it immediately seemed like a great fit thanks to the remarkable similarities of the two, and the first official image release showing Kutcher in his Steve Jobs role only confirms that he is at least aesthetically the right man for the job.

The released press image shows Kutcher fully kitted out as the former Apple Chief Executive Officer, sitting in an Apple office with some extremely familiar technology and memorabilia surrounding him. It is actually quite staggering how closely the Two and a Half Men star actually resembles Steve Jobs in his youth, with every individual aspect of his appearance seemingly covered to ensure that it invokes the maximum emotional response from the audience.

It seems like all has been quiet on the jOBS movie front in recent months, with the cast and crew going about their daily business of putting the final touches on the movie to ensure that it gives an accurate portrayal of the life of one of the world’s most likeable personality. With editing and polishing all but complete, it has recently been announced that the movie will premiere at the Sundance Film Festival that will be held in Sundance, Utah between 17th – 27th January. Fans and critics alike will not only get their first chance to see what Stern has created with his biopic of Steve Jobs, but the movie has also been given the privilege of closing the festival. 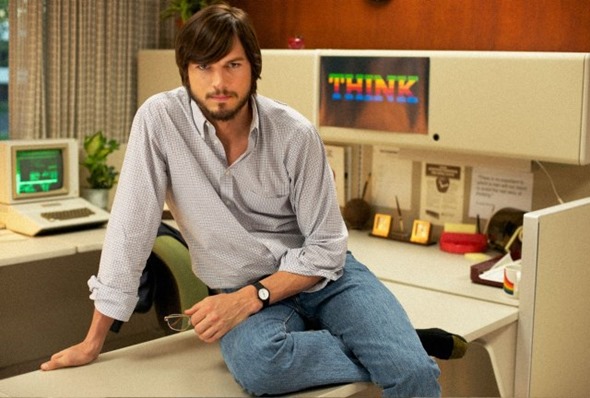 The official Sundance Festival website describes the movie as the "true story of one of the greatest entrepreneurs in American history" and that it "chronicles the defining 30 years of Steve Jobs’ life". Fans of Apple and the man that has been celebrated as bringing the company back from the brink will surely be in for an emotional roller-coaster ride, but a lot of the focus will ultimately be on Ashton Kutcher and the job he does in his portrayal of the technology icon.