The HTC One was regarded by many as the best smartphone on the market last year, and despite the subsequent release of other main players like the Galaxy Note 3 from Samsung and Apple’s iPhone 5s, quite a few still consider this to be the case. The Taiwanese outfit’s success with the One provided a much-needed bit of respite following a steady decline in market share prior, and recently, we’ve been hearing that it’s successor – unofficially dubbed the HTC One 2 – is en route to market. Today, courtesy of a leaked photo, we may have our first legitimate glimpse at the eagerly-anticipated handset.

Apple’s devices have long since been lauded as beautiful, and as such, the physical changes over the past few years, to the iPhone range in particular, have been incremental at best. There were similarly rave reviews about the HTC One’s form factor, which took a leaf from Apple’s book by sporting a slick aluminum unibody, and the leak of the HTC M8 – its would-be successor – suggests that the next model will also offer a continuation of this revered design language rather than opt for any radical redesign.

This leaked shot of the One 2’s rear-end indicates that the device will be built in a similar way to the current model, and with rumors surfacing that it could sport two cameras on the back – a first for a major smartphone – this image seems to back up that notion.

HTC made a song and dance about dispelling the “megapixel myth” with the One, opting for a 4-megapixel main camera that it re-branded ‘UltraPixel’ for its ability to let in more light. It would seem that the company is looking to bring something equally new and exciting to the table once again in 2014, although it remains uncertain how these two cameras will be used to benefit the overall shot-taking / video-capturing abilities. 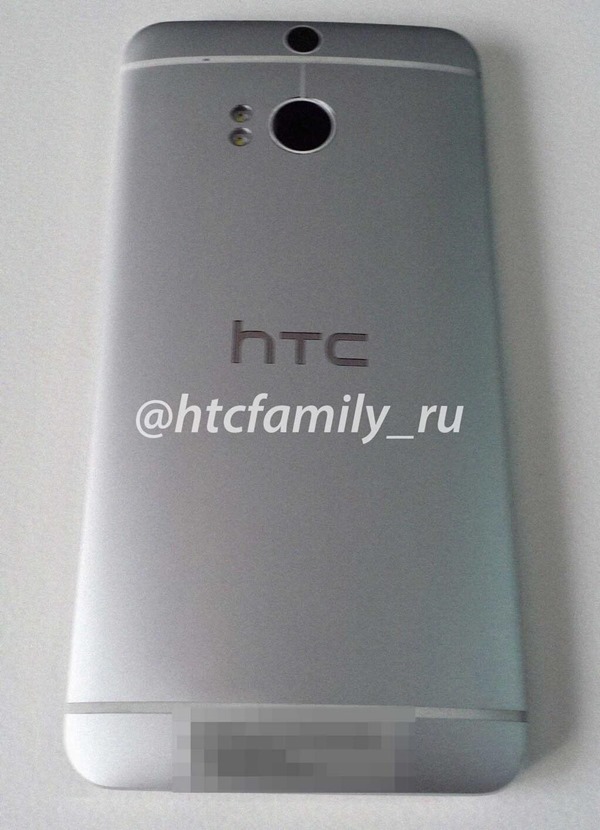 Aside from the two cameras, you can spot the dual-LED flash next to the larger lens, which would theoretically make for better photos in low-lighting conditions.

The device does look a little bigger, although it’s really hard to tell from just the one leaked photo, but if so, this would tie in nicely with the idea that the next flagship from HTC will sport a larger display.

As for a release date, it’s being suggested that we’ll be seeing it as soon as late next month, and with the original HTC One hitting stores last spring, it would certainly tie in with the typical one-year release cycle.