Watch: President Obama Uses iPad To Record A Video Inside A Classroom [VIDEO]

As the president of the United States, Barack Obama is more than used to having his picture taken. Part of the burden that comes with being among the world’s most powerful leaders, he cannot escape the press taking snaps and recording video on his every move. In a more light-hearted environment such as a classroom, though, a busy man like the president gets a rare chance to kick back and enjoy himself, and as you’ll see in the clip below, he took full advantage on one visit to a school in Maryland by taking some amusing videos of his personal press team using an Apple iPad.

The iPad belonged to one of the students, and despite the fact that he or she happens to be rocking an older model (regrettably, perhaps, since the new iPad Air boasts a slightly better rear-facing camera), the student certainly has a little personalized memory to treasure. 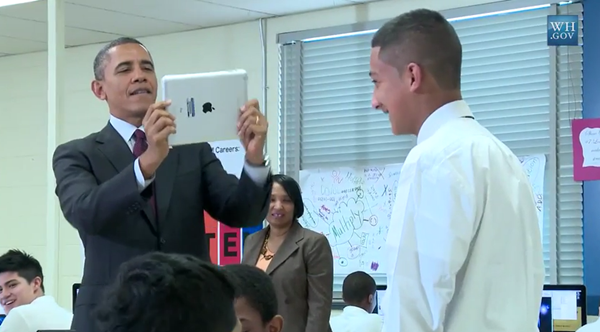 In the video, the president is seen recording a few words from the teacher before turning the lens on his press team, at which point he even profiles a Secret Service agent by the name of Mike. Given that Secret Service agents are meant to be as covert as possible, we’d hazard that the video was probably removed from the iPad or edited in some way, but nevertheless, Obama maintained his reputation as one of the cooler presidents of recent times by playfully recording from the iconic Apple slate.

The president was visiting the Buck Lodge Middle School in Adelphi, Maryland to discuss the progress of his ConnectED, program. It’s an initiative that Obama has devised to help drag American students into the modern Digital Age, and while it wasn’t in his immediate plans to stop by the math class and start playing director with a kid’s iPad, he did show that tech could be used for enjoyment as well as education.

In the process, he also somewhat avenges the press with some filming of his own, and although he could probably have done with a more up-to-date model, he will likely just be pleased to be on the other side of the camera.

Check out the video below and see for yourself how the whole thing unfolds: