The first beta of Firefox for Windows 8 Touch has just been made public, and if you happen to be an owner of the Microsoft Surface, Lenovo IdeaPad Touch, or any other such device, you will definitely want to be testing this one out. As ever, much attention to detail has been paid by Mozilla, creator of the famed Firefox browser, and even though it’s just a beta and thus, will be expected to harbor some imperfections, it certainly does take full advantage of Windows 8’s unique functionality. Full details, as well as information on how to download the beta for your device, can be seen after the fold.

Mozilla has never been known to slack, but has seemed particularly busy during the past year or so. As well as the ongoing developments with the Firefox OS, the company only yesterday showcased its Android Firefox launcher, which, when released, will sit atop the very powerful EverythingMe home replacement. All this, allied to the continued work to bring updates to the main desktop browsers for Windows, OS X and Linux every six weeks, means that Mozilla is very stretched, but somehow, time has been made to optimize Firefox for Windows 8 touch devices.

This touch version of Firefox has been a long time coming, particularly given that Windows 8 launched all the way back in October of 2012, but nevertheless, the extra development hours spent on this project appear to have been put to good use. The Firefox start screen is now very tile-centric to nicely complement the Metro UI of Windows 8.x, and one can readily utilize this interface for quick access to everyday Web-browsing commodities such as Bookmarks and History.

Unlike many standard apps that have been ported to the touch-based interface, Firefox for Windows 8 touch already feels as though it was always built for these devices. It’s comfortable to use when readying your favorite websites, and the basic set of gestures make using the app incredibly simple. 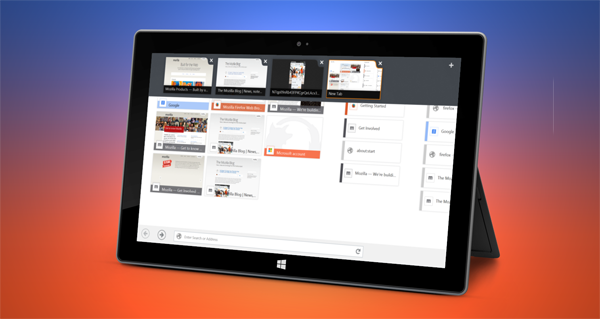 In addition, you also get the added treat of the Awesome bar, and will full-screen support from the get-go, Mozilla has definitely built the foundations for Firefox to make waves on yet another platform.

You can download the new Firefox beta by pointing your browser to: mozilla.org/beta