It wasn’t that long ago when users had to wait an eternity for the developers over at Mozilla and Google to push out new versions of the popular Firefox and Chrome web browsers. In fact, pretty much every major browser version seemed to have an extremely long shelf life before the developers felt it needed an update and brought new and improved features to the public. Thankfully, it looks as though that trend of making users wait for improvements has been put to bed, with Mozilla pumping out the updates thick and fast for its Firefox browser. It was only the end of January that the development team released Firefox version 10 into the wild, bringing numerous security fixes as well some additional features such as CSS3 3D transforms and anti-aliasing for WebGL. Just under six weeks down the line and Mozilla have today released Firefox version 11 which doesn’t offer any mind blowing enhancements or new features and can be seen as a more evolutionary update rather than revolutionary. The quick release seems to fall in line with the new browser update strategy which has been adopted to keep up with Google who decided to significantly reduce the time scales in between their Chrome browser releases.

Firefox is one of the world’s most popular web browsers and will obviously have a massive amount of people heading for the download button, but just what is included in the version 11 build? Well, as mentioned earlier, there isn’t a great deal to get excited about, but it does feature a few significant improvements which will benefit both developers and the average user, as well as offering the obligatory bug fixes which are present in every build.

The most notable addition to Firefox version 11 is the ability to migrate bookmarks, browsing history and stored cookies from Google Chrome, with Mozilla also adding synchronization features for add-ons and adding support for some additional CSS properties. From a developers point of view, Firefox 11 brings the availability of the CSS style editor as well as being able to fully visualize a web page in 3D thanks to the new page inspector 3D view. A number of fixes have also been implemented which were left outstanding in the previous build, most notably a fix which brings redesigned HTML5 video controls, as well as rectifying the issue which prevented Growl notifications from being displayed when using Growl 1.3 or later. 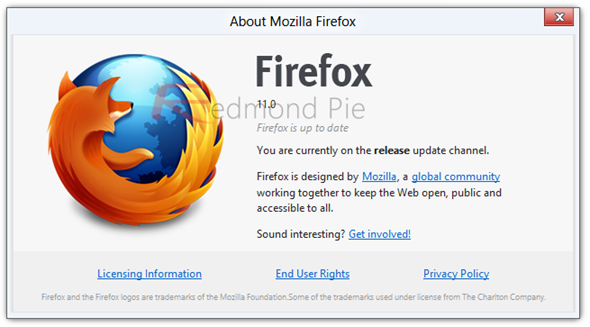 With the time scales between each release being significantly cut, it is to be expected that each new public release will be more of an incremental build rather than one which comes out with an array of new and impressive features. However, with that in mind, the shorter time scales will also see any annoying bugs or issues being ironed out a lot quicker.